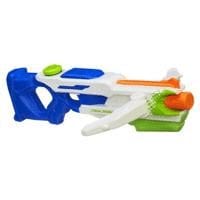 The NSR-cs6, with its’ fast and easy high powered pump action and triple discharge system, along with the high capacity 40 ounce ammo chamber will give you an excellent strategic advantage on the battlefield. The fast and easy pump high powered actions produces enough pressure velocity to discharge a high volume stream of water that will penetrate up to 38 feet inside the line of defense of your adversary.[easyazon_block add_to_cart=”default” align=”right” asin=”B00EAHY1QS” cloaking=”default” layout=”left” localization=”default” locale=”US” nofollow=”default” new_window=”default” tag=”126p86-20″]

The NSR-cs6 also comes with a unique and dynamic stealth and extra element of surprise feature. Strategically positioned on the fore-grip, you’ll find a slide switch that deploys two more discharge ports in a cross-bow style. You now have THREE points of discharge providing you with a broad range of cover that will subvert your adversary’s defense and allow you to move in close to take your adversary out at point blank range.

The dynamic, ready for battle design, of the high performance butt-stock allows the operator the flexibility to discharge ammo from three shooting platforms, while standing up-right. The operator is able to pose the Super Soaker Blaster at the shoulder, mid-torso, or at the hip. The high performance butt-stock is the also the ammo camber which holds 40 ounces of water and makes the weapon slim and free from detachable extending parts.

The NSR-cs6 will inspire spirit and give hours of fun with family, friends, and neighbors. The NSR-cs6 is also conveniently designed for fast reload and can be easily handled by ages from 6 years old and up.

In comparison within the Nerf Arsenal the Nerf Super Soaker Tri – Strike Crossbow has the longest range, highest capacity ammo capability, and most versatility.

The NSR-cs6 – Nerf Super Soaker Tri-Strike Crossbow is strategically designed, battle ready, and custom made for the warriors and heroes of the winning side.