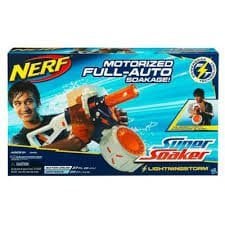 The Super Soaker Lightningstorm is a top of the line blaster in Nerf’s Storm Series. It comes packaged with a whopping 37 ounce/1.2 liter water drum, and is the largest capacity of any other Nerf Super Soaker. Additional drum clips can be purchased separately. The clip system provides you with a fully inter-changeable arsenal at your fingertips by also allowing the use of the other smaller clips designed for other super soakers. Block incoming water torrents with the built-in blast shield, and choose whether to use the gun with or without the detachable stock. It is fully motorized and requires only four ‘AA’ batteries, so you’ll waste no time pumping that needed pressure. Add it to your weaponry and open up the possibility for dual wielding. A 25 foot range allows you to reach out and touch anyone with extreme accuracy.

The Lightningstorm easily out-distances most of the other blasters on the market today. However, you do want to watch out for the new Nerf Hydrostorm Blaster; it can reach distances of up to 30 feet. Even so, the Hydrostorm will only be a challenge in a short fight since it does not utilize the clip system and has a limited capacity of 25 ounces. Additionally it has six ‘AA’ batteries pumping that motor, so your adversary will quickly be empty and running for a safe refill zone. A circular motion twin-stream of water headed your way tells you the Nerf Tornado Strike is closing in with it’s 20 to 25 foot reach. The Tornado is classified as a medium blaster, but don’t let it’s standard nine ounce capacity make you overconfident because it also uses the clip system. You should still have the advantage using the Lightningstorm because the pump-action piston of the Tornado Strike can be stiff and difficult to pump.

If you’re looking for a water gun capable of thoroughly soaking the opposition repeatedly, and for longer duration, keep the Nerf Super Soaker Lightningstorm on your list of things to buy. Don’t forget the extra water drums!