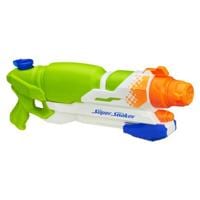 [singlepic id=765 w=450 float=left]The Nerf Super Soaker Barrage is a fun pump action blaster that really makes the word “soaked” second nature when used, and hydrowars enthusiasts and other water action lovers will enjoy firing off this blaster at their victims. This blaster is easy to fire and easy to refill when you run out of water, so if you want a blaster that’s simple yet complete with features, this one is certainly for you.

This blaster’s pump action fires the water out as soon as the pump is pulled all the way in, so whenever you’re ready to fire the gun, all you have to do is give it a pump and the water will shoot out. The blaster can hold up to 88 ounces of water inside allowing for about 67 shots a tank, which is a plus about a gun its size. It’s also equipped with three nozzles on the end of it, each of which has its own range of fire. The distance nozzle is ideal for shooting at a farther range of up to about 35-38 feet maximum, the flood nozzle spreads the water out a little more and is ideal for about a 15-20 foot range, and the scatter nozzle fans the water out in more of a mist that reaches about 8 feet for a close-range shot.

The blaster’s selling price is about $20 which isn’t terrible, but there are other guns that have more features and a little better range that you can buy for the same price, so the blaster is more of a low to mid-end product. Other blasters it could compare to are the super soaker 300 without the triple tanks and backpack, or a larger version of a super soaker micro burst but with a better pump on the blaster and a more steady stream of water.