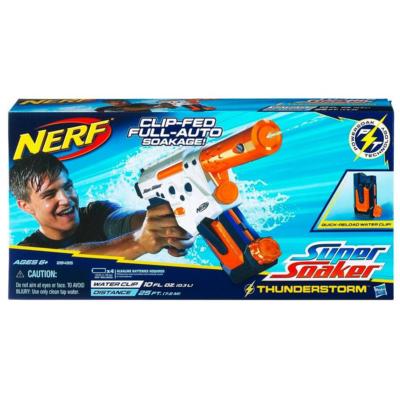 [singlepic id=599 w=450 float=left]Who doesn’t enjoy completely soaking their opponent? Whether it be your best friend, your dad, or even your kids, complete soakage is the goal! The Super Soaker Thunderstorm by Nerf may be exactly what you’re looking for.[easyazon_block add_to_cart=”default” align=”right” asin=”B00416QW88″ cloaking=”default” layout=”left” localization=”default” locale=”US” nofollow=”default” new_window=”default” tag=”126p86-20″]

Fill the water clip with up to ten fluid ounces, and you’re ready to go! The stream of water can reach up to 25 feet, so you can come in for front line shots and revel in victory. Thanks to the blaster’s completely waterproof battery pack, this fully automated blaster is perfect for duel wielding. No more hiding from your opponent to pump, just pull the trigger! Also, without having to pump, the pistol is easier for small hands to wield, so younger super soaker can join in the fun as well!

Though the stream may be smaller than other super soakers, the clip system gives such an advantage that can’t be argued with. Stock up on extra clips and prepare for an all out water war. The stream is also consistent as long as you hold down the trigger, so enemies beware! This summer, arm up with this awesome blaster and prepare your friends for the Thunderstorm!

Comparable to the Super Soaker Electrostorm, the Thunderstorm is larger and the removable clips make it a much more desirable super soaker. The Tornado Strike also offers this interchangeable clip system also called Clip System Canisters, however it lacks the instant action of the Thunderstorm and requires pumping. With a lower power grade that is made up for in accessibility, the Thunderstorm is a great blaster in a long line of Super Soakers. Though about mid-range when held against other super soakers, don’t forget about the opportunity to duel wield. Not only can it bring in the younger soakers, but the speed advantage of the clip system will blast away the competition this summer.

Bring on the soaking!