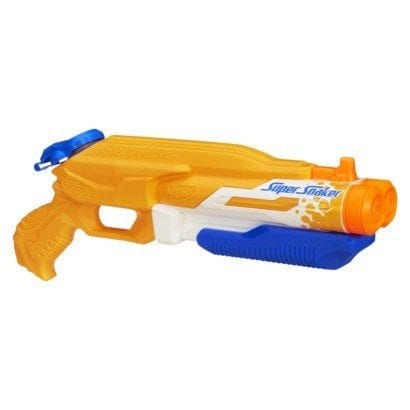 [singlepic id=766 w=450 float=left]Do you need an effective sidearm for the next water gun fight you find yourself in? Is your primary assault weapon maxed out and you need a trusty secondary weapon for quick fire? If so, the Nerf Super Soaker Double Drench is the gun for you. This quick to fill, quick to fire gun is there when you need it and small enough to be fired with a single hand. However, the pump action is able to provide enough air pressure behind your shots that you still have exceptional range with your weapon. After all, this isn’t a squirt gun fight. It is a full fledge assault on your water enemies.[easyazon_block add_to_cart=”default” align=”right” asin=”B00EAHXYPC” cloaking=”default” layout=”left” localization=”default” locale=”US” nofollow=”default” new_window=”default” tag=”126p86-20″]

The Nerf Super Soaker Double Drench is on the lesser side of the Super Soaker water guns. However, this gun is not designed to be in the same category as the big boys. This is a gun that is easy to cary and not heavy, yet the 27 lunch tank is still able to discharge water up to 30 feet. This way, you don’t have to worry about over large guns and the double-barreled gun gives you twice the firing power at the same time. After all, two barrels are always better than one and every pump provides six streams of water at once.