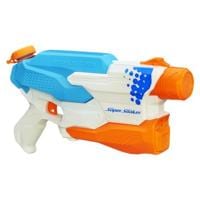 Summer is right around the corner and now is the time to begin building your water assault-weapon arsenal! The Nerf Super Soaker Hydrostorm Blaster is new in 2014 and is part of the Nerf Storm Series. The Blaster does not require any pumping; it is a motor-pressurized water-weapon that only requires the use of a firing trigger.

Soak your opponent from up to 30 feet away with this Super Soaker! Many of your opponents will have water-weapons with range of 25 feet or less and a tank with 20 ounces or less of water. The Hydrostorm Blaster will give you the advantage of your opponent with a 25-ounce tank and with the extended range.
The Blaster is a mid-range Soaker in the Storm Series. It is intended for users ages 6 and up and requires “AA” batteries. The batteries replace the need to create water pressure through pumping. This gives the user a tactical advantage because he will simply point and fire the water-weapon at his target. Meanwhile, the opponent with an inferior water-gun will be forced to pump his weapon prior to firing. Most Nerf Blasters have a firing trigger, although some blasters feature a push-and-pull or manual firing style.

The Nerf Hydrostorm is available in two different color schemes. The options are between cyan, white and orange or blue, white and green. It is one of the most user-friendly water weapons on the market and is a great example of how the Nerf Storm Series allows any amateur to soak his target with ease! Win the water war in 2014 by upgrading to the Hydrostorm Blaster. Don’t waste time pumping your weapon, just add batteries and fire away!