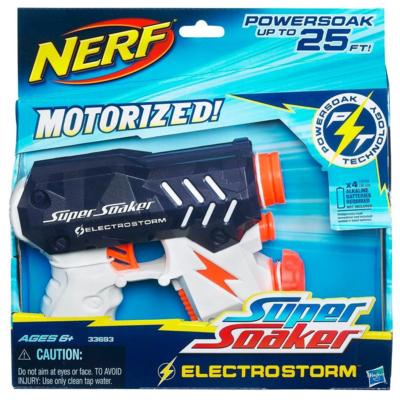 Electrostorm, the super soaker from Nerf, is a compact, motorized pistol of watery fun. Being on the low end of the Super Soaker tree, the Electrostorm does not sacrifice the fun or the quality. Designed for ages 6 and higher, the Nerf Super Soaker Electrostorm is great for backyard play or pool side fun. It is awesome for surprising coworkers or that kitty that just will not listen. Small and powerful the Electrostorm is not to be underestimated.

This blaster has a range of 25 feet with a capacity of 2.7 fluid ounces of water. The Electrostorm is motorized, therefore it does not require a manual pumping action. This is perfect for the stealth approach or the surprise dowsing. A single trigger pull results in a steady stream of water to emit from the blaster. For full auto soaking, all that needs to occur is the trigger held and the other guy gets a blast of water.

There are comparable blasters such as the Nerf Super Soaker Flash Blast Water Blaster which is in the same line up as the Electrostorm. While the Flash has a slightly longer range 29 feet verses 25 feet, and a larger reservoir of 3.7 ounces as opposed to 2.7, the Flash is not motorized like the Electrostorm. This means that the Flash has to be pumped per shot and full auto requires a significant amount of pumping action.

At first glance, the longer range and larger reservoir would seem to give the Flash Blaster an advantage. However, the Electrostorm is superior in one major aspect. This blaster can be used one handed. It does not require two hands to operate and fire the water gun as opposed to the Flash. In fact, two Electrostorm blasters could be used for double the soaking capability.

The Nerf Super Soaker Electrostorm blaster is a fun addition to any water arsenal. Compact and motorized for stealth, this blaster has the power to soak the opponent from range. With two Electrostorms in hand means the fun does not run out.