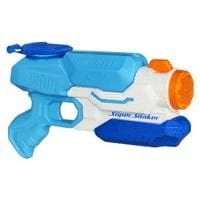 The Nerf Super Soaker Freezefire is a nicely styled and comfortable-to-hold pump-action water blaster that really doesn’t pack much of a surprise. It is functional and the stream-creation is fairly smooth, however the lag experienced while attempting to rapidly pump puts a definitive damper on how well the Freezefire could preform in play.

Features of this blaster include a relatively standard sized nozzle for water guns this size and is able to produce a smooth stream at an average range. The pump is comfortable to hold, however has an angular design and less-pronounced ridges, giving it less grip than other models. The volume of the pump is slightly larger than other models but this doesn’t prevent the user from experiencing pump lag when attempting rapid fire. The grip and trigger are comfortable and easy to hold, however because these are part of the reservoir they are less sturdy than other models. The reservoir of this gun is fixed at double the capacity of most other models of this type and has a large opening, intended to allow ice cubes to be inserted. The cap is a snap-cap with a rubberized inner layer to attempt to prevent leakage.

The price range of this blaster sits at around ten dollars US currency. The cap appears to be able to be turned ninety degrees either way before opening but there are no instructions indicating this and by first appearance looks like a standard snap-on. This, along with the fact that it has a pump action which provides lag and the fact that it is not quite as sturdy as other models, puts it in the lower end ranges of its series.