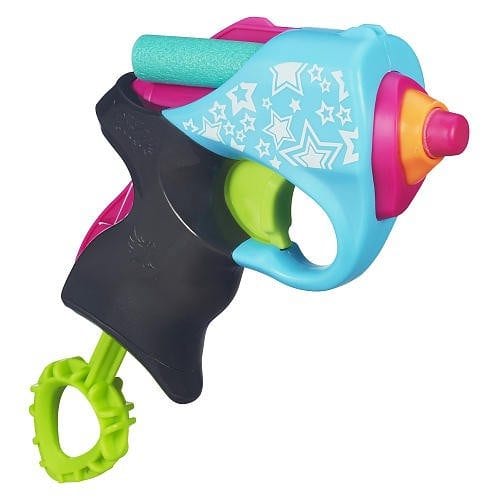 The blaster is small enough to fit in even the smallest hand; the dart blaster features two easy-to-load reusable foam darts. The blaster includes a storage space for one dart, ensuring that you will never loose your ammunition. To fire the blaster, just pack one of the darts into the front of the muzzle, making sure it is securely in place and pull back the latch along the handle. The blaster is ready to fire with just the pull of the trigger!

Small enough to fit in a child’s backpack or pocket the Nerf Rebelle Angel Aim Mini Blaster features a purple, pink, or green color scheme that will excite any young girl. All versions include an intricate star pattern on the side and a black handle. The trigger and body of the dart gun vary in color according to which scheme is chosen. The latch for loading the darts features a finger sized hole allowing for ease of use no matter what hand size.

The Nerf Rebelle Angel Aim Mini Blaster is significantly smaller than most other NERF guns and features a much brighter and more cheery color scheme appropriate for younger girls. An adult should have no trouble operating the mechanisms however they are primarily sized for young girl hands. The relatively low price tag of the blaster, at about seven dollars, means that it is on the lower end of the NERF lineup and affordable to almost anyone. The range on the blaster will be shorter than most NERF guns due to the lighter pull on the loading mechanisms and significantly smaller and more lightweight darts. The dart gun is made entirely of plastic and is resistant to water and can be safely used outside without fear of damage from the rain.

The blaster is appropriate for use by ages 8 and up although children younger than 3 should not use the blaster due to the choking hazard.