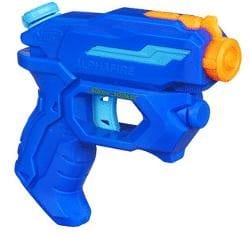 [singlepic id=770 w=450 float=left]The Nerf Super Soaker Alphafire is a Nerf gun that can shoot water up to 20 feet. The Alphafire is blue in color with light blue and orange details. It is classified as a squirt gun and is the first squirt gun ever made by Nerf. Small in size, these guns are relatively cheap and are sold individually or in packs of four.[easyazon_block add_to_cart=”default” align=”right” asin=”B00EAHXWP4″ cloaking=”default” layout=”left” localization=”default” locale=”US” nofollow=”default” new_window=”default” tag=”126p86-20″]

This new edition to the Nerf collection features a three stream shooting system that works to create a triple water blast, striking a broader area than a single stream is capable of and soaking your target. It is equipped with three nozzles arranged in a triangular pattern. This awesome blaster doesn’t require you to pump it, at your convenience, you can simply fill the tank up with water and unload. The tank holds a little over 7 ounces of water. More specifically, it holds a maximum of 202mL of water. The Alfafire is labeled for ages 6 and up, and it’s small size would be very appropriate for small hands as well as adults.

In ranking, This blaster lies in the mid-range of the Super Soaker blaster series. The Nerf Super Soaker Alphafire has more volume per shot than Nerf’s Super Soaker Zip Fire and holds over twice as much water. It also puts out more water with each shot than the Nerf Super Soaker Tri Strike Cross Bow. Unfortunately, due to the Alphafire producing relatively thin streams like the Zip Fire, the Alphafire’s water blasts can easily be affected by the wind. In comparison to the Nerf Super Soaker Alphafire, If you want something that can blast even further, Nerf’s Super Soaker Flash Blast holds only 3.7 ounces of water but can shoot streams of up to 29 feet away. If you are looking for more tank capacity and a slightly broader launching distance, Nerf also has a Super Soaker Shotwave Blaster available that can launch up to 25 feet away and holds 10 ounces of water in its included unattatchable water clip. With the Shotwave Blaster, you also have the option to hold the trigger down for nonstop soakage.

The Alphafire’s comfortable compact size for easier use and faster reaction time, combined with its abundant tank space, makes these Nerf guns perfect for water fights. This blaster is undoubtedly called a super soaker for a reason and is a great way to cool off while having fun on hot sunny days.