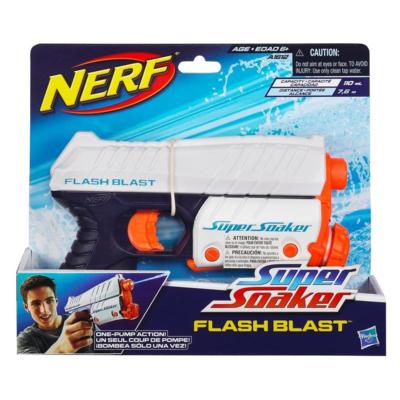 [singlepic id=593 w=450 float=left]The NERF SUPER SOAKER FLASH BLAST, if done correctly, could look like the spitting image of Deckard’s pistol from Blade Runner. This weapon looks exactly like a traditional pistol, although it has a fatter, longer barrel and an extended base past the trigger. You would need to do a little bit with the paint job, but the overall design looks exactly like you are about to go hunt androids in the near future of Los Angeles’ wasteland.[easyazon_block add_to_cart=”default” align=”right” asin=”B009UO8GJE” cloaking=”default” layout=”left” localization=”default” locale=”US” nofollow=”default” new_window=”default” tag=”126p86-20″]

The actual features of the Flash Blast are rather straight forward. The gun is designed with a pump once, pull trigger design, so you don’t have to prep the gun all that much. The thick barrel in front of the trigger just needs to be primed once and you are ready for combat. When in close quarters, you don’t want something that requires multiple pumps and is going to be hard to move around. This Flash Blast is designed for the ultimately movability and is something that you can have holstered along your side at all times or use as your primary weapon. However, do take into consideration that it is only able to hold up to 3.7 ounces of water, which is not all that much. Because of this, you need to consider this more of a sidearm than anything else, as after only a few shots, you’ll be out of ammo and need to reload.

In terms of color, if you want to go for the Deckard Blade Runner look, just painting the entire gun a nice, matte black color, you should be good to go. In fact, since it is designed more for close quarters, this might be the desired look. However, it can also look more like a space-based science fiction weapon, in which case the top of the barrel already has a nice gray and blue stripped look. You can continue this look throughout the entire gun, should you desire. Ultimately though, it is an excellent side arm that doesn’t take long to fire and gives you exceptional distance for its size, no matter where you need to fire it.