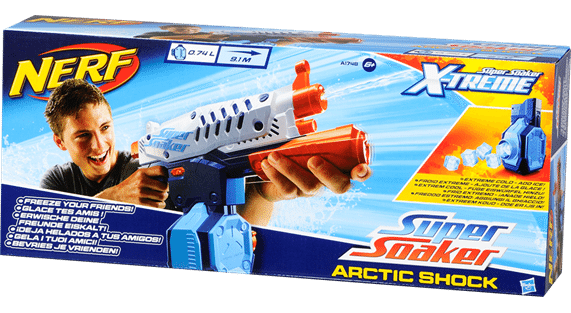 [singlepic id=591 w=450 float=left]Leave your friends out in the cold with the Arctic Shock, a Super Soaker from Nerf! This entry in the X-TREME series was released in 2013 and is a fun, safe and affordable way to cool off during those hot Summer days.

Much like its cousin the Scatter Blast, the Arctic Shock is a pump-action water blaster with an ammo capacity of around 25 ounces of water but, while the Scatter Blast has a range of only about 20 feet, the Shock dwarfs it with a range of up to 30, or even 40 feet if the shots are angled upward! Another thing that makes it unique is the large drum located under the barrel that not only holds water but, ice as well, making this one blaster that chills the competition. Another wonder of the Arctic Shock’s design is that it has a high compatibility with other Super Soaker parts, including an attachment for a stock, allowing even more comfort and a unique personality for each person’s blaster, depending on their tastes. Several drums can also be filled with ice water and utilized interchangeably for speedy reloading when a drum is spent, so the game can continue uninterrupted.

For parents this a safe product with no small or toxic parts for children to swallow, as its ammo is just clean tap water, meaning it is also affordable, with a $19.99 price tag at most retailers, and an easily renewable ammunition source that does not get lost, and therefor does not have to be replaced. The best part is that you can have fun too, as there is nothing wrong with still being an enthusiast for something whose predecessors you may have even enjoyed as a kid, yourself. So, get out there and play!