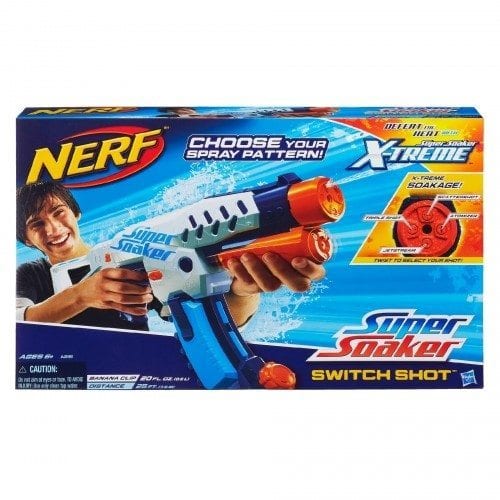 One of 2013’s high-end releases, the Switch Shot gets it’s name from the twist knob above the front of the barrel that allows you to quickly change between one of 4 firing options: Jetstream, a single jet; Triple Shot, 3 jets in a slight spread pattern; Scattershot, 5 jets in a wider spread pattern; and Atomizer, a conical mist spray. It boasts an effective range of approximately 7 feet using the Atomizer setting, or up to 25 feet using one of the other 3 options.

The Switch Shot comes with a 20 oz banana clip using the undercarriage connection in front of the trigger found on some other Super Soaker blasters. This allows you to carry extra clips for rapid reloading, as well as giving you the flexibility of using larger capacity clips or hydro packs that also share the same connection system.

While the Switch Shot shares similar features with other blasters, it offers a fairly unique combination in overall design. It does not have a trigger, similar in that regard to the Nerf Scatter Blast or Arctic Shock water blasters, instead firing as you pump. The Switch shot has the added stock though, giving it stability and accuracy as you spray. This feature as well as the overall balance in design makes it very comfortable to use, and the Switch Shot’s multiple blasting settings set it apart from any of the other blasters in the Super Soaker line.