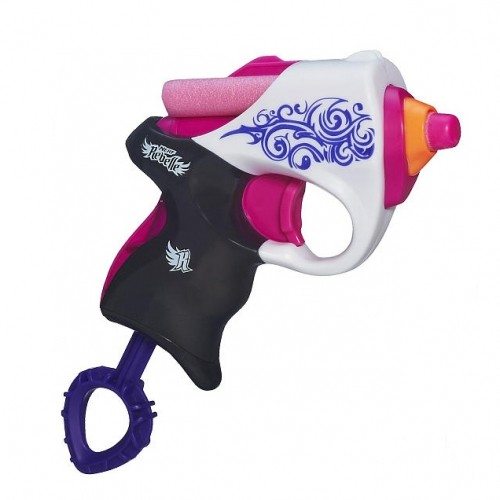 Watch out boys! There is a new Queen of the backyard battlefield. This princess of pain has a brand new arsenal of blasters that are both high performing and good looking. No longer confined to the boyish blocky blasters of yesterday, our heroine now commands respect with her prowess and exceptionally well styled blaster. The Rebelle© line has been released!

Hasbro has unveiled their Rebelle© line of Nerf Blasters. A traditionally boy’s exclusive toy, Hasbro has attempted to bring what they call “a combination of active play and social interaction.” A move prompted to cash in on the movie industries latest blockbusters with female leads.

The Sneak Attacker© is the entry level blaster in the Rebelle© line. Sold in a two-pack, it features a small compact design with a single shot capacity. The small frame makes it easy for concealment and great for stealth operations. The Sneak Attacker© is similar in size and operation to the Nerf -N Strike Jolt©. Don’t be fooled by the size though, the small blaster has a range of 65ft.

The Sneak Attacker© sports the standard pink and white theme found in the Rebelle© line. The upper receiver is white with a stylish design on the side (there is more than one design). The small “snub like” barrel is pink with a smaller orange bezel on the end. Finally, the handle is your basic black.

The blaster has a single shot capability, the single dart is loaded directly into the barrel. Charging the blaster requires pulling the charging handle, which is located within the grip. The single shot and long reload lends the blaster to be more of a special operations or fallback type of sidearm.

The Rebelle© line has also released darts that are styled in line with the series. The Sneak Attacker© two-pack kit comes with four of these limited edition darts.

The Sneak Attacker’s© functional yet ladylike design will lend itself to be a capable sidearm for that daring darling as she makes her “active play”…more active. Whether used as a concealed surprise blaster or as a backup for that quick draw, the Sneak Attacker© will be a mainstay and a prized sidearm.