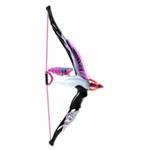 With the success of movies like The Hunger Games and Brave, bows are cool for girls. And Nerf intends to capitalize on that with the new HeartBreaker Bow, coming to stores in fall 2013. This weapon is part of the Rebelle line, Nerf’s attempt to bring girls into the blaster market.

When a toy company sets out to appeal to girls, one thing is inevitable: pink. The HeartBreaker is mostly pink and white, with a pink string and grip and an abstract avian design on the limbs of the bow.[easyazon_block add_to_cart=”default” align=”right” asin=”B00GU2QEFM” cloaking=”default” layout=”left” localization=”default” locale=”US” nofollow=”default” new_window=”default” tag=”126p86-20″]

The HeartBreaker’s design is simpler and less mechanical-looking than Nerf’s better-known Big Bad Bow, which has been in production in various forms since the late 90s, most recently as an Avengers movie tie-in. The HeartBreaker also comes in fairly cheap, only $19.99. While Nerf hasn’t released exact size and weight stats, the HeartBreaker is likely to be smaller and lighter weight than the Big Bad Bow in order to fit girls’ hands better, and have an easier pull in order to allow even small girls to draw and fire.

The HeartBreaker uses a pull-and-release mechanism, unlike the Big Bad Bow’s plunger, which should help simulate the action of a real bow better. Instead of arrows, the HeartBreaker fires standard-sized Nerf darts. It won’t win any rapid-fire competitions, since each dart must be loaded and fired singly. However, it doesn’t compromise on shooting power for girls: its advertised range is 75 feet, over twice the range of the Big Bad Bow.

The Rebelle weapons will be equipped with special darts that come in feminine colors and what Nerf calls collectible designs, although from a parent’s point of view, “collectible” isn’t a term that fits well with something that frequently gets shot all over the house and lost down the back of the couch. The HeartBreaker will ship with five darts as well as a five-shot-capacity clip that can be mounted on the bow’s tactical rail. The tactical rail can also be used for a cell phone cradle (available separately) that’s being produced for the Rebelle line.

The simple, lightweight mechanism and low price point make the HeartBreaker a good first blaster for younger kids who might not have the coordination or patience to master more complicated weapons.