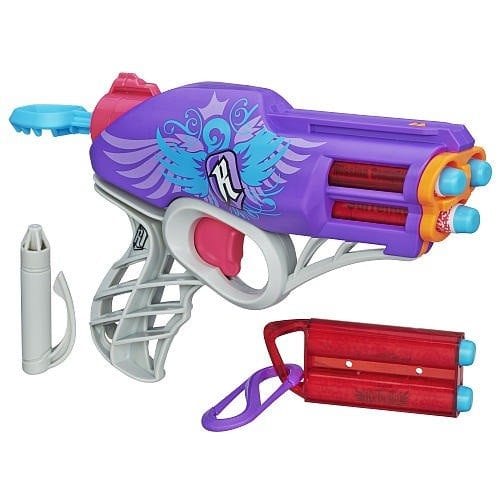 Perfect for either a new initiate into the Nerf foam dart army or a seasoned veteran, the Nerf Rebelle Messenger blaster is a great addition to your combat toy arsenal. This one-handed pistol is part of the “Secrets and Spies” line. So not only does the Messenger fire accurate shots up to 75 feet, it can also carry secret messages that only your allies can decode. Using the pen included with the blaster and stored conveniently in its handle, you can write messages on any of the 5 message darts that come with the dart gun. The messages can only be deciphered by placing the darts into the accompanying double decoder which can be clipped to your belt, backpack, or gun for easy access.

The Messenger is a mid-range blaster with a 3 dart capacity barrel that must be primed before each shot. Simply pull back on the direct plunger, aim, and fire. Similar in size to the Nerf N-Strike Elite Firestrike and in design to the Nerf N Strike Elite Triad EX 3 Blaster, the Messenger combines the best of both. This dart gun is big enough to carry several shots before reloading and accurate enough to make each shot count.

For those interested in customizing the Nerf Rebelle Messenger for LARPing, cosplay, or just putting a cool paint job on it, this blaster is ready. The unique 3 barrel design makes the Messenger ideal for sci-fi, fantasy, and/or steampunk costumes since such an arrangement is uncommon in modern weapons. This weapon would look appropriate in a Final Fantasy-type outfit or even better if someone painted it matte black and cherry red to accompany a Harley Quinn costume.

The Nerf Rebelle Messenger transforms a dorm room, living room, or even a cubicle farm into a fun and exciting battle zone where everyone wins.