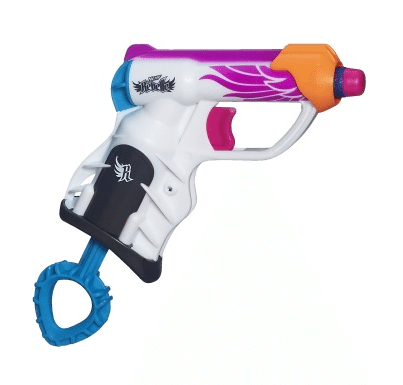 The Nerf Rebelle Jolt is a single fire pocket sized Nerf Gun released in 2014 for the Nerf Rebelle Series. The Rebelle series is a line of Nerf guns targeted to female Nerfers of all ages. With a pretty white, blue and pink color scheme and angel wing decals the Rebelle series is great for girls on the Nerf attack. While the Jolt itself may be tiny, don’t be fooled by it’s seemingly comforting size. This dart gun packs the punch with medium to long shooting range and comes with two whistler darts per blaster. The only disadvantage of this blaster is it’s single dart capacity which makes it require ammo after each shot. The dart gun lies at the lower end of the Rebelle series because of it’s affordability and simplicity in design. The Jolt is extremely popular among Nerf gun enthusiasts for those reasons and will certainly provide hours of fun.

The Nerf Jolt is very similar to the Secret Strike AS-1 and Secret Strike Pocket Blaster both in their size and ammo capacity. Before the introduction of the Jolt, the AS-1 was the smallest Nerf gun available. The Jolt lacks the AS-1’s tactical rail, a place to attach Nerf accessories such as lights and flip-up sights. However, the AS-1 lacks the Jolt’s trigger fire mechanism and instead uses a firing button. The Jolt wins with a trigger that provides a more authentic dart gun feel.

The Nerf Rebelle Jolt without any modifications would look awesome for fantasy cosplay. The nontraditional color scheme would be good for fairy tale or magical themes. Give this dart gun a bronze coat of paint and a dusting of gunmetal varnish and it would resemble a steampunk pistol. Another idea would be to paint it a matte jet black and convert it into a sleek James Bond-esque forty-five. The creative possibilities are endless and the Jolt is extremely easy to work with due to it’s small size and limited amount of parts.