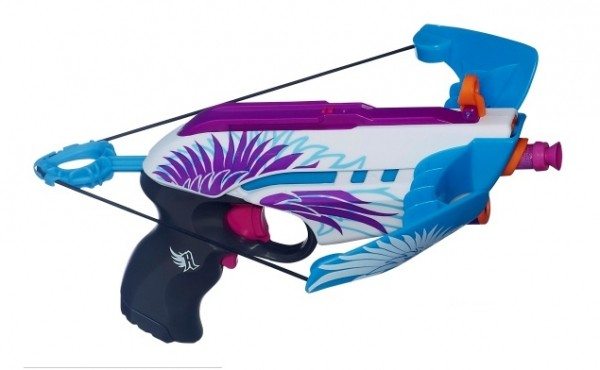 If you like a dart gun with a little crossbow action, you can test your straight shooting skills with the all-new Nerf Rebelle Star Shot. This dart gun is the latest in the Nerf Rebelle series, which has overall produced good quality dart guns. Others in the Nerf Rebelle series that have had some similarities to this are the Nerf Rebelle Guardian, and to some degree, it could compare to the Zombie Strike Crossfire Bow. The pink and purple colors this dart gun comes painted in as well as being a Rebelle series blaster make the gun marketed more towards females, but the display of power with this gun also makes it appealing enough for males to buy and perhaps repaint the color.

In terms of the key features this gun comes with, it doesn’t operate completely like a crossbow in that the bow and the string are merely attachments to the gun, but they do add a nice crossbow look. You fire the gun by pulling back a built-in primer that locks in until the trigger is pulled, and then released. The gun usually comes packaged with 6 darts and they can be placed in small compartments on the bow when they aren’t being fired. The bow and string can easily be attached or detached depending on your preferences. Packaged with the gun is also a cardboard target to test your archery skills with. The target can be placed on the floor, on a shelf, or hung from a door or wall. The target also comes with a holder that you can place both your gun and darts when they aren’t in use. This dart gun’s listed range is 75 feet, but in most cases it’s probably only going to be effective at a maximum range of 40-60 feet.[easyazon_block add_to_cart=”default” align=”right” asin=”B00EDBYB5C” cloaking=”default” layout=”left” localization=”default” locale=”US” nofollow=”default” new_window=”default” tag=”126p86-20″]

In terms of the product line, if you’re purchasing the dart gun for the purpose of competing in dart gun archery contests, then it’s definitely a top of the line product. If you’re looking to participate in dart gun combat such as humans vs zombies, then this would be a low end product for that. If you wanted to paint the gun, many colors would work, but a black with maybe a little bit of silver ninja look is one I would recommend.