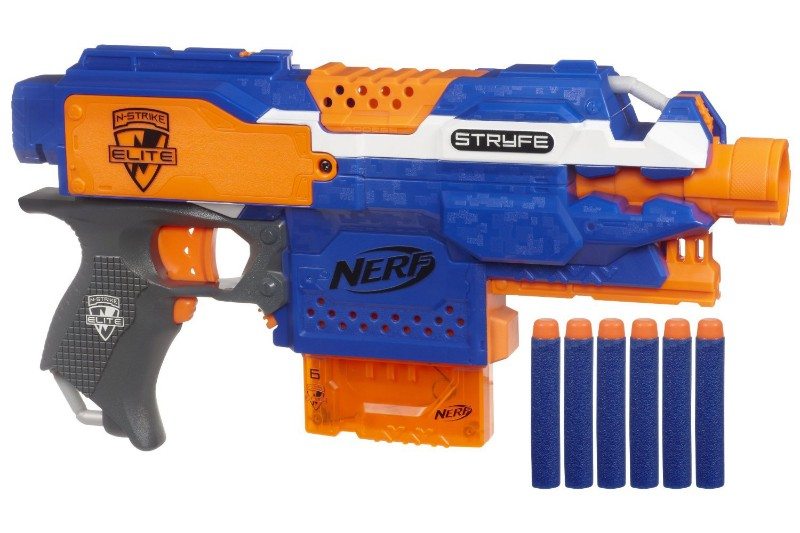 Nerf has released another ridiculously fun blaster in their long tradition of excellent toys. With a slew of features, the Nerf N-Strike Elite Stryfe blaster will offer much more play time than traditional Nerf guns. This blue and orange sidearm has excellent accuracy, and as with all blasters in the N-Strike line, is compatible with numerous accessories, making it an all in one arsenal.

To begin with, the Elite Stryfe is a small one-handed blaster with a range of 75 feet, comparable to the Strongarm or Maverick, though it uses a battery operated motor instead of a revolving barrel, which makes it easier to reload. It is the smallest weapon in the N-Strike line, which also contains shotguns and fully automatic machine guns, but it will work with many of the same attachments as those weapons, so it will complement your set nicely.[easyazon_block add_to_cart=”default” align=”right” asin=”B009T45XNM” cloaking=”default” layout=”left” localization=”default” locale=”US” nofollow=”default” new_window=”default” tag=”126p86-20″]

It is most comparable in size and range to the N-Strike Elite Retaliator, a pump firing weapon. Because it is electronic, the Elite Styfe does not need pumping to be fired, giving you a edge over your friends in terms of firepower!

The Elite Stryfe offers the ability for numerous attachments to expand into a long barreled rifle for greater range, and several of sights for long distance sniping. This versatile blaster offers many different types of engagements, from indoor play to outdoor battles.

The Elite Stryfe set comes with a reload clip and the six darts you will need to fill it. Older clips in the N-Strike line tend not to work as well with the new weapon, so if you’re planning on longer fights before tracking down your ammo, it’s recommended you pick up a few new clips while you’re at it.

It is comparatively inexpensive at $19.95, and is one of the more modest weapons in the N-Strike line, but it can be just as impressive with attachments. The attachments must be bought separately. This blaster will need 4 AA batteries which are also sold separately.