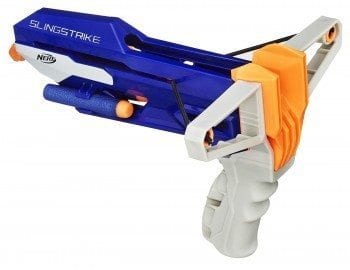 Nevertheless, there are comparisons to be made to other similar types of Nerf blaster guns. The Nerf Zombie Strike Crossfire Bow Blaster, for instance, is a strikingly similar blaster to the Elite SlingStrike. Both blasters have a sling that has to be loaded with blaster darts before the user can commence firing. The differences occur where the SlingStrike does not have a trigger to be used before firing while the Zombie Strike does require a trigger before the string fires the dart. Additionally, the Zombie Strike Crossfire Bow Blaster is modeled after the famous crossbow used by Daryl Dixon on AMC’s “The Walking Dead”. Although it should be noted that Hasbro does not specifically mention the show or the character when advertising for the Bow Blaster.

Overall, the Nerf N-Strike Elite SlingStrike will prove to be a valuable addition to the Hasbro Nerf blaster gun lineup. Luckily consumers will not have to wait too much longer to experience all of the great things that this blaster gun has to offer.