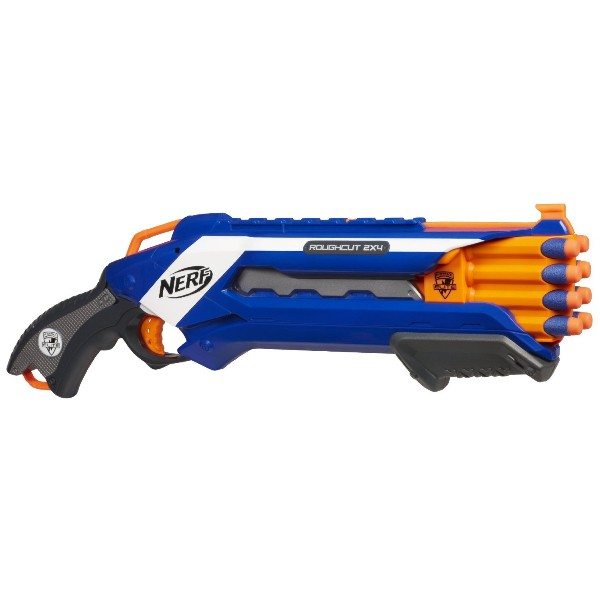 The Rough Elite Blaster is a fairly new release for the NERF Elite series and performs somewhat reliably. A sleek design kind of shines to the eye and the color palette is fairly attractive. The blue kind of giving off a swift and smooth type of impression. While not at the top end of the list, it shouldn’t be overlooked. The gun itself features a musket type of handle which is why it holds the reason as a good back up weapon, easy to grip and flip up to a hip fire position. And with the minimum distance of of nearly over 9 meters, it can save you in case you don’t have time to reload which moves me on to the next aspect of the gun.

The ammo capacity is a simply 8 round mag. Stored at the front which is a bit odd but useful none the less. The great thing about this gun is the fact that the darts can be replenished in any chamber. They don’t have to be on an even level or one side to fire 2 at a time. The gun has a type of sensor which prioritizes the darts top to bottom.[easyazon_block add_to_cart=”default” align=”right” asin=”B009T45XN2″ cloaking=”default” layout=”left” localization=”default” locale=”US” nofollow=”default” new_window=”default” tag=”126p86-20″]

So if you have to panic reload the toy, you can just pick a chamber to slam the dart back in and get your barrel back up in somewhat minimal time. One of the modes included in this Elite model is the “slam fire” mode, where you simply hold down the trigger and pump repeatedly which unloads the darts as you pump, which is another good option to have in a panic situation and need to get someone off your back.

An overall enjoyable piece in the NERF Elite arsenal and a good value for $20 or so. A better pick then other models such as the Maverick since there is no risk of jamming with the absenteeism of the cylinder loading function. However, because of the loading I would definitely say that this gun should not be used as a primary weapon.