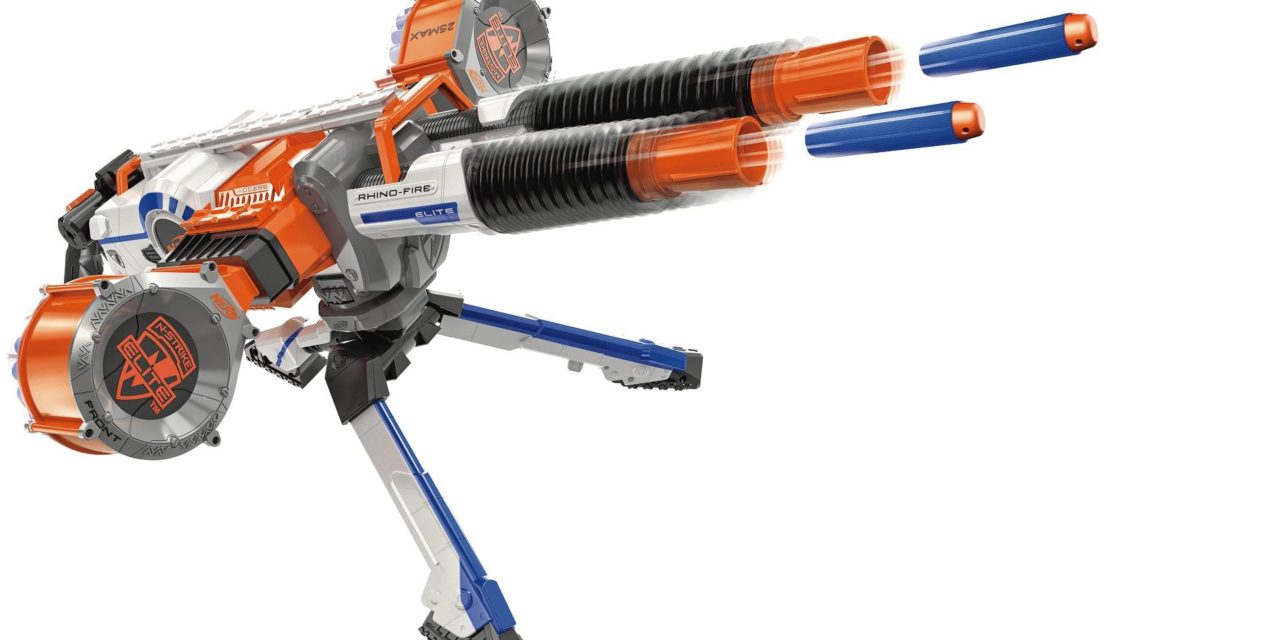 The NERF N-Strike Elite Rhino-Fire truly takes NERF weaponry to the next level. The high-end blaster is fully automatic, and sports two barrels mounted on a tripod that hold a max capacity of 50 darts. With a range of up to 90 feet, you can surely dominate any type of NERF battle, peppering your target up close, or raining darts down in a long-range aerial assault. It’s appropriate for everything from dominating neighborhood fun-and-games to thwarting an impending zombie apocalypse. You can never be too prepared!

There really is no equal to this blaster in the NERF world. Even if you faced off against 2 N-Strike Elite RapidStrikes, with a Centurion Blaster added on for good measure, your range and fire rate would still give you the advantage in any NERF skirmish. It also doesn’t hurt that the Rhino-Fire happens to sport a sleek, mechanical look that evokes all type of new-school and old-school imagery. You’d be just as likely to see this type of blaster on the giant robots in “Titanfall,” or as an often-used prop in a 2014 remake of “American Gladiators.” Kids and parents might both be scratching their heads with that range of comparison, but if you ask each other, I’m sure you’ll both get a thorough explanation.

For those who want to modify their Rhino-Fire and take it to a new level of style, a military look seems perfect. The Rhino-Fire’s sturdy base and complexity, when camouflaged, would make it appear very authentic. It’s got a decidedly futuristic look, so applying a sci-fi, “Star Wars” paint job to it could create something that would pass for a blaster on the Millenium Falcon.

With a unique design, overwhelming range and capacity, and so many customization possibilities, the Rhino-Fire seems poised to take a position at the top of the NERF pecking order.