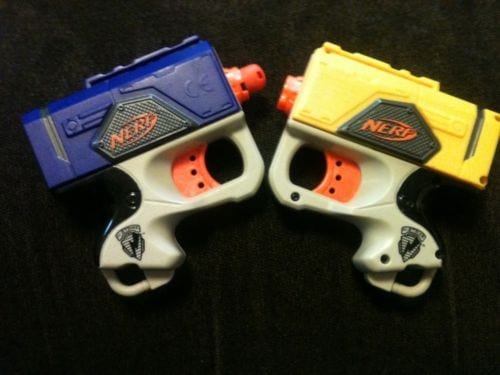 Just like you can customize your Nerf war any way you want, there are a ton of great game modes to play as well. Be creative. While it never hurts to stick to tried-and-true matches of Capture the Flag, you never know what epic moments will happen when you engage the opposing team in a new way.

Don’t forget to set ground rules and other details before starting. While these might seem like dull technical matters, they really go a long way in making sure everyone knows how to play and has fun. You probably have your own personal favorites already, but here are two more game ideas to consider for your next Nerf war.

Players: Minimum of six, though more is definitely better, divided into two armed teams. At the start of the match, each team designates a hostage to give to the other team. (Or the teams can alternate between who has a hostage and who are the rescuers if you don’t have a lot of people playing.) Each team has a limited amount of time (like 2 minutes or so) to disarm, hide, and guard their hostage before each team is allowed to begin their hostage recovery maneuvers.

Battlefield: Can be inside or outside, should be decent sized, with various routes that can be taken between the two team’s sides and places to hide their hostages. Each team should also have a designated respawn spot.

Objectives: Each team is trying to rescue their hostage and bring them back to their own base first to win. Rescuers can tap their hostage to arm them and free them, but only have 1 life, while captors have unlimited lives but have to go back to respawn when hit.

Players: You can play in two-man teams or have each man fend for himself. It is best to have at least 5 or 6 people playing, but the more the merrier of course. Everyone should be armed, but what type of load out is up to your discretion. Some people have no gun type limits while others insist on everyone having “gunslinger” style single-shot Nerf pistols only.

Battlefield: Small to medium size area, with a good amount of cover so people don’t feel tempted to hide for too long. You’ll need as many hats as players or something that people can wear as a “flag” to clearly indicate when they have been shot.

Objectives: This game tends to be short and fast since it encourages people to be strategic or insanely daring. Like many games, the last one (or last team) standing wins, however, the “flag” life mechanism makes for interesting gameplay. When a player is hit, they step out of bounds for 10-15 seconds and put on the “flag”. If they get shot again while wearing the flag, they are dead permanently, but if they manage to hit someone else they re-gain a life and can remove their flag.

Have you played Hostage or Gunslinger Heaven before?