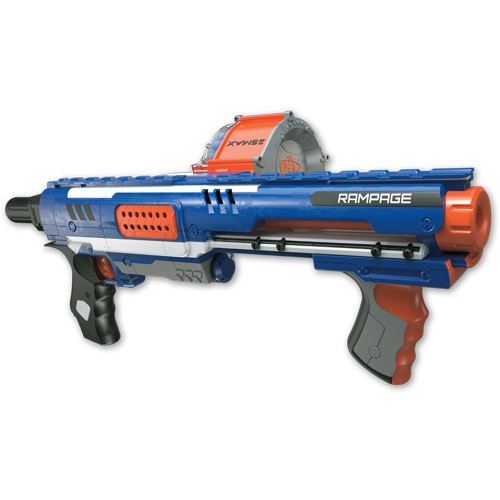 The Nerf N-Strike Elite Rampage is a new and cutting edge nerf toy that allows its user to target and strike their opponent at a close or far range. One of the features that this product offers includes the SLAM-FIRE, which allows its user to shoot out 25 darts at maximum speed . This nerf gun is also compatible with any clip system N-STRIKE blaster. The tactical rails on this product allow the customization for a variety of accessories, which can be purchased separately. Additionally, this product is able to shoot from a distance of 75 feet, with two different firing modes, which is a phenomenal feature for any kid that enjoys sneaking up on his or her target and striking.

This toy is perfect for the Nerf N-Strike collector, simply because it offers what many other basic nerf toys do not. There are many advanced functions in this product, including increased strike range of a whole 75 feet, which is probably one of the best features about this toy. Many nerf toys are not suitable for outdoor use due to their poor strike power and inability to shoot long ranges, but fortunately, this is not an issue for this toy. Something else that makes this toy stand out would be how it is buildable; the user is able to purchase different products that attach to the Nerf N-Strike Elite Rampage, customizing the product for his or her own needs. At the end of the day, customization is key. If three different children have the Nerf N-Strike Elite Rampage, their models could be completely different due to customization.[easyazon_block add_to_cart=”default” align=”right” asin=”B0083TXX9U” cloaking=”default” layout=”left” localization=”default” locale=”US” nofollow=”default” new_window=”default” tag=”126p86-20″]

The Nerf N-Strike Elite Rampage comes with 25 elite darts, which are different from the old streamline nerf darts in that they are lighter with a shorter tip stem, thus allowing the elite dart to glide smoother and faster. To reload the Nerf N-Strike elite rampage, one simply loads the dart drum with a maximum of 25 elite darts, and snaps it into place. This easy to use cartridge allows for faster response when striking targets. After choosing one of two firing modes, the user can then click the trigger once for a single shot. If the user desires a more intense strike, then he or she can hold down the trigger while continuously sliding the SLAM FIRE handle in order to induce a stream of darts aimed at the target.

The Nerf N-Strike Elite Rampage appears to be a great product because of its variability. This toy is perfect for either the beginner or advanced nerf competitor, offering a buildable toy for the cost of less. I would give this product a thumbs up for anyone looking for a versatile nerf gun suitable for the youth or adult population alike.
Overall, this product seems fairly successful due to its appeal to a variety of age groups. The one downfall of this product is that is only holds 25 darts, which a user could go through fast if participating in a heated competition. One of the positive aspects of this product, however, is that it seems lightweight enough to travel with on the field. I would recommend this product to anyone looking to engage in nerf war competitions.