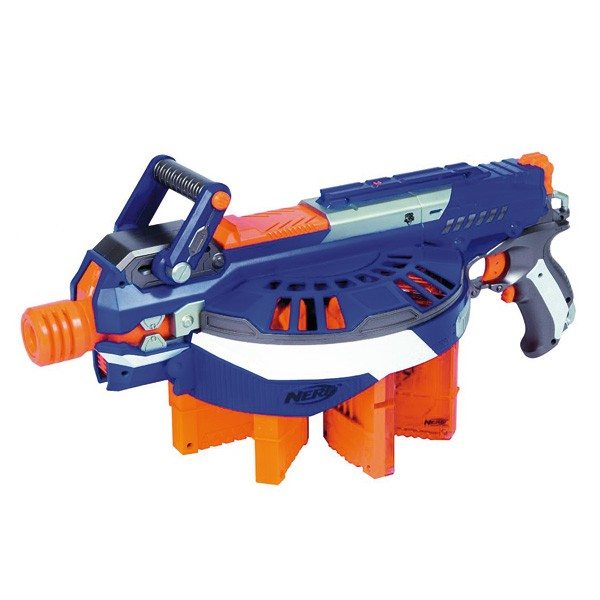 The NERF N-Strike Elite Hail Fire is the latest blaster for your arsenal. Like the Elite Rampage and Elite Retaliator, the N-Strike ups the ante. It can hold an astonishing 144 darts, making it the most powerful option in the game. While your opponents are reloading, charge full steam ahead with 8 clips in the chamber, cutting loose a semi-auto attack.

Quick Note: The name of this blaster is commonly mistaken as “Hailstorm”.

NERF has been the leader in designing foam dart blasters. They’re a safe and exciting way for kids of all ages to get up and engage in physical activity. In a world of video games, that should be encouraged. From NERF N-Force, with swords fit into the back sheath, to the modifiable Retaliator with its four blasters in one, NERF continues to give us a good reason to get up, get out and play, laugh and enjoy ourselves.[easyazon_block add_to_cart=”default” align=”right” asin=”B0083TXXZ4″ cloaking=”default” layout=”left” localization=”default” locale=”US” nofollow=”default” new_window=”default” tag=”126p86-20″]

The Elite Hail Fire is definitely a step in that direction. It offers a fantastic blaster performance and Elite Dart. Elite Dart is NERF’s latest push in blaster tech. Using a unique rotating ammo rack, it holds more darts than any other NERF blaster, yet is still lightweight and easy to handle. It won’t stunt movement, which is really vital when you’re trying to avoid being a target. The semi-auto is motorized, allowing a rapid fire discharge that no opponent will be able to withstand.

Remember, this baby holds 144 darts! That’s almost five times what any other blaster can. NERF pros will notice the Elite Hail Fire has two triggers. The second is for acceleration. Use it and ramp up your firing rate to six rounds per second.

The Elite Hail Fire only comes with 25 rounds. You’ll have to purchase additional refill packs to max out the blaster’s potential. The best bet is to grab a NERF N-Strike Elite Refill. It comes with 75 darts and you’ll be able to use them with any N-Strike. That still won’t take the Elite Hail Fire to its full potential but 100 darts is a great place to start when you want your opponent cowering.

The ammo rack rotates. With 8 clips, power up with the accelerating trigger, blasting darts as fast as you can pull the launch trigger. When a clip empties, pull the advanced handle bank and the next clip slips effortlessly into place. You won’t even notice, let alone the guy on the receiving end. With a 75’ range, the blaster’s upgradable with any tactical rail accessory. That leaves room for making this machine even more powerful.
[note]
If you’re looking to take your NERF hunt to entirely new levels, the NERF N-Strike Elite Hail Fire is the place to go. It features: