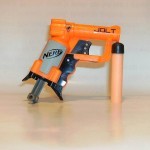 Nerf has been making one shot blasters for some time now. Their newest release -the Nerf Jolt EX-1, proves they are paying attention to what Nerf fans want in a single shot, pocket sized blaster.

Those that have used the Secret Strike AS-1 in the past, are well aware that it is capable of shooting 20 feet. The cool thing about it is it is completely air powered. No springs, nothing. With less moving parts it has less of a chance of breaking. The drawback to this is if you are an avid modder, you wouldn’t have the convenience of popping in a stronger spring to add extra distance.[easyazon_block add_to_cart=”default” align=”right” asin=”B006E1B7ME” cloaking=”default” layout=”left” localization=”default” locale=”US” nofollow=”default” new_window=”default” tag=”126p86-20″]

The Reflex IX-1 on the otherhand does come with a spring, and has a slide-cocking mechanism. It doesn’t shoot that far, but as it is the smallest actual pistol with a hand grip, trigger, etc -they sure are fun to use. Not only will it fit in your pocket like the Secret Strike, but it also can be more easily aimed as it has a grip.

How Does The Jolt Differ?

What makes the Jolt unique, is not only is it smaller than the Reflex IX-1 (it’s about the same size as the Secret Strike), but it has a stronger spring. The stock spring in it is capable of producing 35 foot shots -which is pretty impressive for such a small blaster.

Other noteworthy aspects of it is it is cocked from the bottom. The grip itself houses all the mechanical goods (spring, plunger, trigger), including the cocking arm. Pull down till it is cocked, and squeeze the trigger to let one fly.

Is it For You?

Now, whether under-the-grip-cocking (Jolt) is better than top-of-the-blaster cocking (Reflex IX-1), well…. that’s for you to decide :). Be sure to leave your review/opinions/thoughts below!

Is the Jolt better than the Reflex?