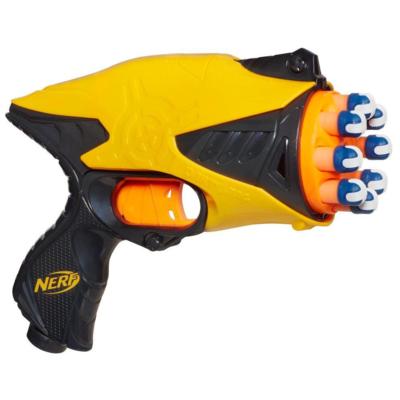 The Nerf Snapfire 8 was released in July 2012 and one of the many dart guns in Nerf’s line. It is a great addition to anyone’s arsenal and can provide plenty of fun and excitement. It resides in Nerf’s Dart Tag line, and its capabilities will give anyone the edge they need for fun Nerf wars.

With the Nerf Snapfire 8, you have the ability to change the blaster’s power by adjusting the knob on the bottom of the blaster. Players can use this knob to change the spring length and power of the plunger, and the handle provides an indicator to show how much it has been adjusted. Players can choose from less power with high speed for quick shots, or less speed with a high level of power for truly powerful firing. While going for speed, the dark range is between 25 to 30 feet, and with power, the Nerf Snapfire 8 can shoot up to 40 feet. The capabilities allow the Nerf Snapfire 8 to fire semi-auto without batteries.

The Nerf Snapfire 8 features a single-fire dart blaster and does not support use with barrel extensions or shoulder stocks. The product comes with the actual blaster, 8 darts and a manual. It can hold 8 darts at once, and it uses Elite Darts and Tagger Micro Whistler Darts. The darts are easy to load. They simply slide in from the front. It uses a long trigger pull that pulls back the plunger, which as stated before can be changed to speed or power, to propel the darts from the blaster.

Benefits to the Nerf Snapfire 8

The settings on the Nerf Snapfire 8 provide players with the ability to choose speed over power or power over speed, depending on the scenario. Plus, the firing mechanism allows semi-auto shooting without using batteries, so when it comes to speed, the Nerf Snapfire 8 can meet nearly anyone’s needs. This blaster is great because it is versatile, providing excellent speed one minute and great power the next.

There are some Nerf products that are comparable to the Nerf Snapfire 8. These are also great tools for any Nerf arsenal and provide great shooting capabilities. The Nerf Speedswarm can hold two more darts than the Nerf Snapfire 8, and it features fully-automatic and semi-automatic capabilities, but it requires batteries. Its accuracy and reliability are high, while the rate of fire is somewhat low. The Nerf Swarmfire is another blaster that is similar to the Snapfire 8. It is fully automatic and requires batteries. It can hold 20 darts at once and has great accuracy, reliability and rate of fire.

The Nerf Snapfire 8 is a great toy for my kids but also my husband and I. My kids love the speed and that it doesn’t “die” because it doesn’t need batteries. Loading darts is simple, so they have no trouble reloading the ammo. When we can wrestle it away from our kids, my husband and I also enjoy fighting with this blaster because we can choose between speed or power. The only complaint I have about it is that it fires the 8 darts quickly, so reloading is common.

The Nerf Snapfire 8 blaster is a versatile blaster. It may not be the best in the Nerf line, but it can easily transition from speed to power, and although it is semi-automatic, it does not require batteries. It doesn’t hold many darts, but because it is so versatile, it is a great toy for any Nerf game.