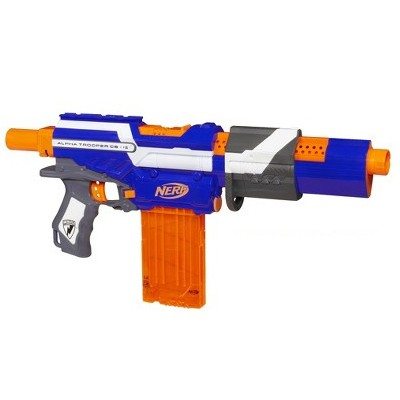 The Alpha Trooper CS-12 takes Nerf marksmanship to a new level of intensity. This newest, biggest, and baddest entry in the N-Strike Elite Series packs 12 Elite missiles in its clip, and take down targets at up to 75 feet. It uses Nerf’s powerful “slam fire” system to give its owner maximum speed.

To give it even more awesome badness, the newest Nerf can also be outfitted with a shoulder stock and extra darts can be stored in its handle. It’s a big, beautiful gun and a lot of fun. Let’s see how it compares to other weapons in the Series.[easyazon_block add_to_cart=”default” align=”right” asin=”B00DGAXFJY” cloaking=”default” layout=”left” localization=”default” locale=”US” nofollow=”default” new_window=”default” tag=”126p86-20″]

Its big brother, the CS-18 (now discontinued to make way for the new entry), packed 18 Elite missiles for maximum Nerf devastation, but had a range of only 35 feet, which is more than doubled in the CS-12. This huge increase in firing ability is due to the new gun’s “direct plunger” mechanism, which puts its predecessor’s “reverse plungers” to shame. (Gamers will find that modding the new line gives similar results to the previous guns.)

The color scheme for the new line of N-Strike Elite blasters has been changed to give a fresh look for the newly unveiled blaster: white, gray, orange, and blue paint jobs — much like those of the Super Soaker line — give the blaster a feeling of speed in the hands.

While the new toy doesn’t reach the crazy firepower heights of the Hail-Fire (with its multiple clips containing 24 missiles) or the Rampage (25 missiles), it also doesn’t require batteries as the Hail-Fire does, and it gives a much more realistic “feel” than do these larger entries in the N-Elite Series. (For example, the Firestrike, coming out this year, feels like a giant laser cannon rather than a real-world gun.) If a bit of verisimilitude with your Nerf weapon play — but also want a good amount of bang for your buck, this gun delivers.