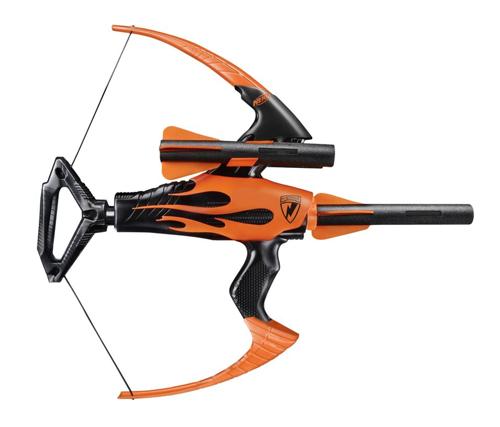 Nerf Wars Heat Up With the New Blazin’ Bow

Nerf has made few attempts at a true bow in its history. The first Bow and Arrow debuted in 1990, with a remarkable range of up to sixty feet, depending on the strength of whoever was firing it. It was re-released in 1994 with whistling arrow tips, but there would not be a truly new bow and arrow until 1998.

The Big Bad Bow moved away from the bowstring firing mechanism to a more standard trigger-fire mechanism, but retained the arrow darts and a purely decorative bowstring. There was another bow attempt in 2001, the Arrow Strike, but its shortcomings failed to bring Nerf bows to the same level of quality and popularity that their blasters had achieved.[easyazon_block add_to_cart=”default” align=”right” asin=”B00DW1JT38″ cloaking=”default” layout=”left” localization=”default” locale=”US” nofollow=”default” new_window=”default” tag=”126p86-20″]

The new Blazin’ Bow is the spiritual successor to the original Bow ‘n’ Arrow and the Big Bad Bow. The compound bow style, with the limbs curved back sharply toward the archer, is extremely similar to the shape of the Big Bad Bow. While it lacks the pulleys of its predecessor, the bowstring is directly attached to the firing handle, and it fires like the original Bow ‘n’ Arrow: by pulling the handle back and releasing.

The most obvious difference between the Blazin’ Bow and its predecessors is the paint job: flat black with orange flames. The theme extends to the arrows as well, with the black shafts are complemented by orange fins. This unique appearance sets it apart from the rest of the N-Strike series, which predominantly features blue and yellow designs.

The Blazin’ Bow is advertised to have an angled firing range of around forty feet. It is important to emphasize angled firing, or firing the bow in an upward arc rather than straight at the target. This adds tremendous range to the arrow, as well as making it easier to hit your target – the arrow darts fly much more slowly than normal darts do, making it much easier to dodge them if your target sees them coming. By firing them up instead of straight, you force your opponent to watch the skies just as much as the ground.