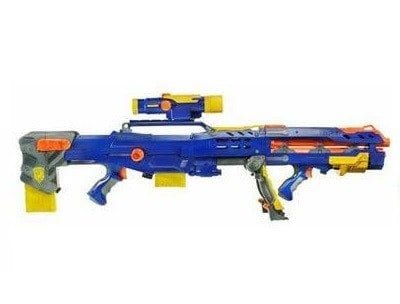 Given the amount of tutorials and online forums that are dedicated to helping people modify their Nerf guns, there’s no doubt that many Nerfers love modding. Some skillful modders, like Brian Johnson of Johnson Arms, have even been able to turn their for-fun pastime into a fairly successful side business.

However, modding skill is relative and it varies with what kind of modifications you do. A paint job on a Vulcan is technically a mod, but altering the internals of that same blaster is much more difficult when compared to other blasters. By that same token, some Nerf guns are more “intermediate” or “advanced” to certain individuals because of technical reasons. For example, if you know how wiring works, a voltage mod on a battery operated blaster won’t be as challenging as it would be for someone inexperienced with electrical systems.

While this is by no means a comprehensive list, here are some good Nerf guns for intermediate level modders to try.
The FuryFire

The FuryFire is basically a more buff Maverick. A single fire, reverse plunger blaster, the FuryFire is a large capacity heavy pistol that essentially has the Maverick’s internals but with a better plunger seal that gives it a bit more accuracy and range. Some modders feel that the FuryFire is easier than a Maverick, while others say it’s slightly harder due to its hidden screws and fragility.

Re-released in 2012, the FuryFire can be ordered online or found in stores like Walmart.

There are a lot of things that can be done to a Recon, but this assault rifle/heavy pistol is somewhat notorious for being a more difficult gun to mod. For example, the Recon’s air restrictor cannot be simply removed but must be drilled out, while alterations like a breech mod involve destroying some stock parts.

Found online and in stores for an average retail price of about $20, the Recon is a good choice for intermediate modders to try more technical mods on. There are also upgrade kits available that can help make modifying a Recon somewhat easier.

Basically a Recon that can change modes and shoot faster because of pump action, the Deploy has a similar reputation of being tricky to mod. Often cited challenges include flimsiness, needing a drill for modification, and being difficult to open up due to its “transforming” abilities. When modifying this blaster, some modders prefer to forgo the “Flashlight mode” entirely and hot glue their Deploy into “Blaster mode”.

A favorite of the sci-fi and military mod community, the Longshot ranges from intermediate to advanced thanks to the challenge of fitting its complex internals back together. In addition, modding the Longshot should not be undertaken unless you’re fairly confident in your abilities as it is difficult to obtain and a very valuable gun. This is largely because Longshots are no longer manufactured in the US and are often priced at more than $100 online.

What’s your favorite Nerf gun for intermediate modding? Share in the comments!