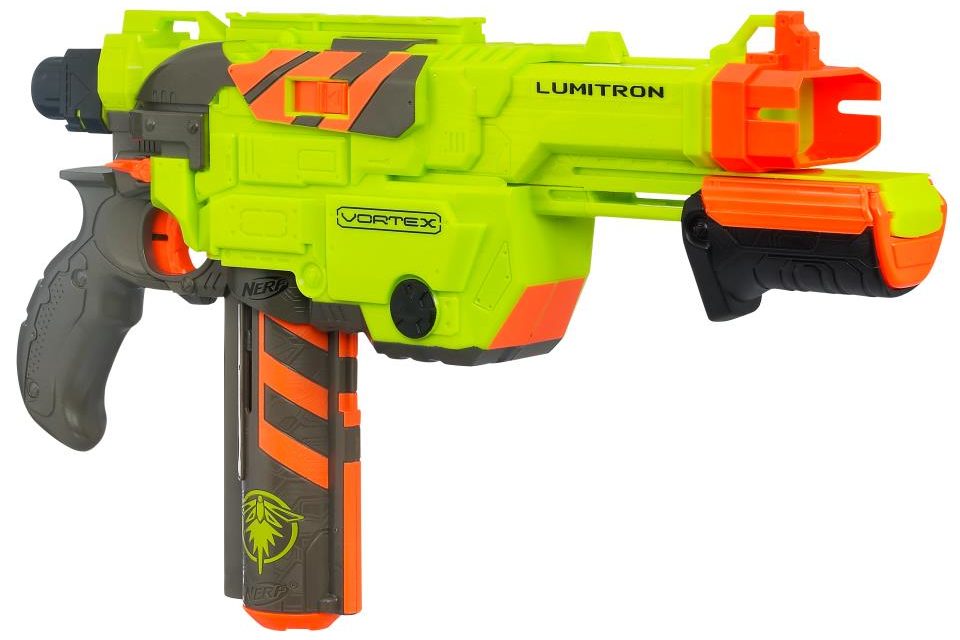 As someone with a passion for toys, I couldn’t pass up the opportunity to test drive the new Nerf Vortex Lumitron. I’ve always liked the Nerf disc line since it arrived, even though I’ve lost many discs, and this new machine compares pretty well to standard Nerf firearms. However, it’s also got a few flaws, detailed below in the Good, the Bad and the Nerfy!

The Lumitron’s firing mechanism is a ton of fun. The easy-access, rapid reload nature of the disc clip prevents fumbling for discs in your pockets, and the glow-charge mechanism is fun for night fights and makes the Nerf discs easier to find. And overall, the Lumitron just looks really cool. It’s got a sleek neon design and looks like it means business![easyazon_block add_to_cart=”default” align=”right” asin=”B0060Y271K” cloaking=”default” layout=”left” localization=”default” locale=”US” nofollow=”default” new_window=”default” tag=”126p86-20″]

Additionally, 10 discs means you can keep the rain of projectiles coming for a good 30 seconds before you need to reload. In a pitched Nerf fight, this can be crucial! The Lumitron also takes non-Firefly (non-Glow-in-the-Dark) discs, and can even be reloaded with a mix, so your enemy never knows what’s coming.

The glow-in-the-dark gimmick, while it’s great for fishing discs out from under the couch, is not much good in the daytime. Since glow-in-the-dark discs are the number one selling point of the Lumitron, this may be something of a let-down for kids: when the sun comes up, the Lumitron loses a lot of its play appeal. In addition, some discs seem to lose their glow-in-the-dark “charge” over time.

Also, the Lumitron itself isn’t quite as intimidating as other Nerf models. Larger Nerf miniguns and shotguns are much more impressive than the relatively small Lumitron. Consider a larger disc shooting weapon if you’re looking to intimidate the enemy, although the Lumitron is easier to pump and reload than most dart-based Nerf products.

Of course, what any buyer really wants to know is: Can you have a Nerf fight with the Lumitron? The answer is, absolutely. While they don’t stick to surfaces like the typical Nerf suction dart, the discs are a lot of fun and bounce very effectively off of many surfaces. They do sting slightly more than Nerf darts, but they are completely harmless and actually travel much farther than darts. Their aerodynamic nature and glow-in-the-dark technology make them nothing if not a very stylish form of ammunition. The Firefly Tech glow charge mechanism doesn’t always work and is a little over-hyped, but it’s nice to have a Nerf gun that does something other than shoot small plastic and foam objects.

Overall, this powerful Nerf firearm is a decent addition any Nerf armory. While it’s not the most rapid-fire or offensively capable Nerf device, it’s reliable and its ammunition is much easier to find when lost! I can’t count the amount of times I’ve lost spare Nerf darts and been unable to find them, but the glow-in-the-dark function helps to recover lost discs. Consider the Lumitron if you’re looking for a flashy, well-armed defensive Nerf variant weapon.