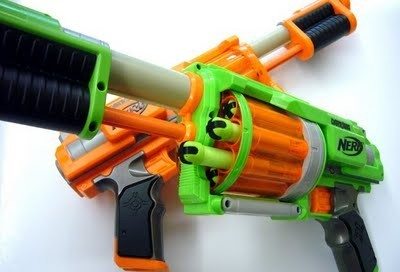 The Official Blaster Used in NDTL 2009

Having been the official Nerf gun of the 2009 Nerf Dart Tag World Championships, you can be sure the Furyfire is a serious Nerf gun built for competitive play. It also quite possibly is one of Nerf’s toughest guns yet.

The Furyfire is pump action, and can hold up to 10 darts – more than the Recon, Maverick, and Longshot to name a few.

Coming in two different colors, and with a site at the end of the barrel, you should have no problem distinguishing the opponent and siting them in.

A lot of Nerfers also admit it gets great range too, out-shooting the Maverick and Nite Finder, and attaining 25-30 feet in range.

To reload it you simply pull the trigger to auto-advance the chamber and individually load each dart as the chamber rotates.

You can find the Furyfire at most major retail stores such as Wal-Mart and Toys-R-us, as well as online in 2-player packs for just $39.99.

This definitely is a must have Nerf gun if you plan on competing in the 2010 Nerf Dart Tag Championships, as it may be the main blaster for the event yet again. Training with one will give you a leg up on the competition, getting you closer to the $25,000 grand prize 🙂