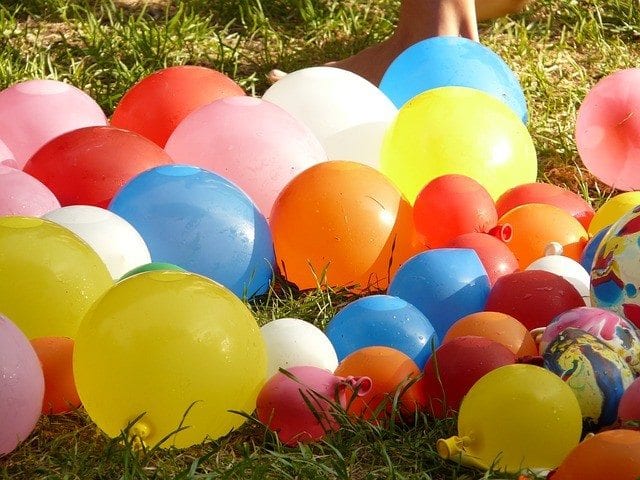 An international franchise, Guinness World Records catalogs and verifies records that are set and broken throughout the world. From feats of human ability to notably unique traits, these records range drastically in scope and include everything from the “Tallest Man- Living”, who is Sultan Kosen at a whopping 8 feet 3 inches (251 cm), to “Longest Marathon Ironing” achieved after Australian Janette Hastings ironed 1,157 items for 80 hours (more than three days)!

While playing with Nerf blasters and Super Soakers is a fun activity enjoyed casually by thousands of kids, teens, and adults around the globe, did you know that Nerf guns have also played a part in setting a Guinness World Record? There are thousands of records of course, but we narrowed it down to two summer favorites: Nerf and water balloons.

Whether you one day dream of breaking a Guinness World Record of your own or just want some interesting trivia to share, check out these awesome Nerf and water balloon records.

Armed with Nerf blasters purchased by the Danforth Center of Washington University in Saint Louis, Missouri, 461 college students set the record for “Largest Toy Pistol Fight” on November 20th, 2010. Facing each other across a marked 3 meter wide ‘no man’s land’, the students were divided up into two massive teams of seniors/freshmen versus sophomores/juniors.  The entire toy gun battle lasted for more than 5 minutes, which is really impressive considering that each student was armed with only one Nerf pistol and three bullets.

Setting a world record is not just a matter of getting a ton of people together however, as Guinness gave very specific guidelines that had to be followed. For those interested, those rules are listed at the end of this article.

Almost as fun as a massive Nerf war or Super Soaker battle, water balloon fights are a top summer favorite that holds a record of its own. According to Guinness, the Christian Student Fellowship at the University of Kentucky held the largest water balloon fight ever recorded in August of 2011. With 8,957 people participating and 175,141 water balloons used during the fight, everyone must have gotten seriously soaked.

Before you think that all Guinness World Records are ones which need a ridiculously huge number of people, both of these impressive records were set by the same two people.

Bipin Larkin and Ashrita Furman achieved “Farthest Water Balloon Toss” in New York on St. John’s University athletics field in October of 2010. How far was this “toss” you might ask? With Larkin throwing and Furman catching, this record water balloon toss took place across a hefty length of 120 feet 3 inches or 36.65 m!

The pair likewise set the record for “Most Water Balloons Caught and Kept in One Minute”, with Furman catching and keeping 18 water balloons at the New York Sri Chinmoy Centre on August 18th,  2013.

This record is for the most people involved in a toy pistol fight held over a period of five minutes.

1. For a successful attempt, only commercially available toy pistols which launch soft ammunition such as balls or darts may be used.

2. Participants must be at least 6 years of age. Those under 14 must obtain parental permission to participate. If all participants are children, suitable adult supervision must be provided.

3. There is to be a ‘no man’s land’ of 3 meters clearly marked on the ground between the two teams.

4. The soft ammunition associated with each participant’s individual pistol is the only thing to be shot at members of the opposing team.

5. An experienced timekeeper should be present throughout the attempt.

7. The fight must last a minimum of five minutes. A loud start and finish signal recognised by all participants must be used. Two experienced timekeepers (e.g. from a local athletics club) must time the attempt with stopwatches accurate to seconds.