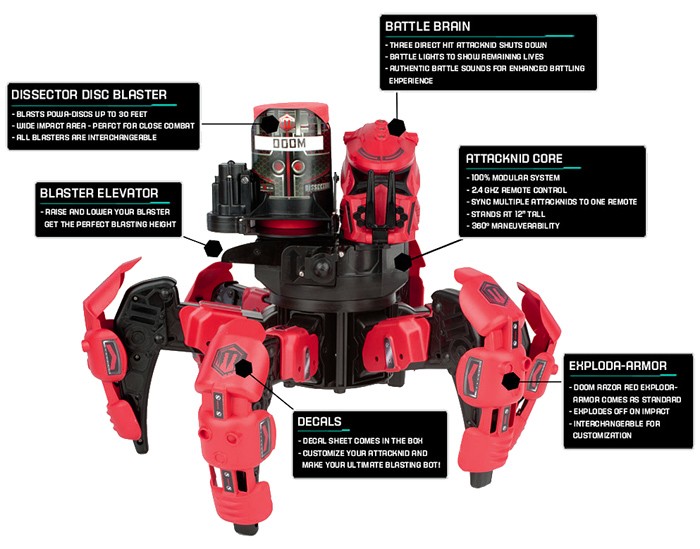 One of the cool new toys introduced by Nerf at Toy Fair 2014 was the Combat Creatures Attacknid. There are remote controlled robots that can fire foam darts. Think of a giant six legged insect that is outfitted with a Nerf machine gun and that you can control from your recliner or while hiding behind a bush, and you get an idea of what the Combat Creatures Attacknid are like. You can avoid immediate retaliation by being able to attack neighbors and friends from afar.

Features of the Combat Creatures

In what may be the best and safest way to harass your parents, siblings, or contemporaries, Nerf has combined two favorite toys of every child and childlike adult by making this killer robot toy. Unlike most remote control cars or other toys on wheels, these creepy crawly robots are able to make their way over stacks of files and piles of clothes thanks to their six legged design.

To hit your target, you only need a basic line of sight thanks to ability of the barrel fed blaster to be adjusted from afar in a complete 360 degree sweep. The remote that is included with the setup is wireless. The Combat Creatures Attacknid are able to fire 25 foam darts in rapid succession before reloading is necessary. This allows you to sufficiently annoy your target even if you miss a few times.

Granted, right now the Combat Creatures Attacknid are only in their prototype phase. We have to wait until fall for the final version to be released to stores. But, the prototype moves fairly slowly. This makes it better for operations where you are able to sneak up on the target. If the target is expecting anything, it will be hard to unleash on them before they notice the Attacknid and take cover.

The Attacknids are much like the N-Strike Elite Rampage on top of a six-legged robot you control remotely and that can go anywhere. In a word: Awesome!

The Combat Creatures Attacknids have actually been around for about a year, but it was only recently that Nerf took over the brand. Originally, they were invented by Jaimie Mantzel. With Nerf taking over the brand, they have incorporated design upgrades, the Nerf orange, and a new controller. Plus, of course, only Nerf darts will work with the Combat Creatures Attacknids.

The Attacknids are set to be priced at a very reasonable $79.99 when they are released. If the splash they caused at Toy Fair 2014 is any indication, they will be a hot commodity come holiday season. The only way they could possibly become a better toy for boys would be if it somehow incorporated cameras and video like the other offering from Nerf at the fair: the N-Strike Elite Cam ECS-12 Blaster. Save up your pennies now because Nerf is going to have some attractive options come fall 2014.