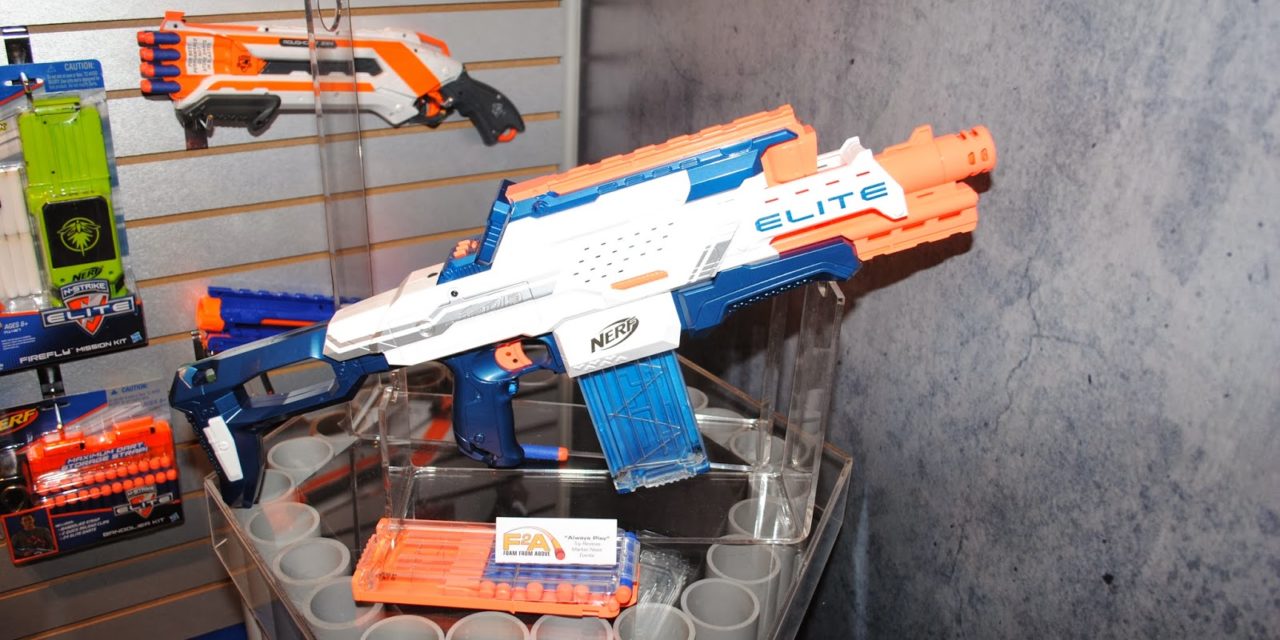 Toy Fair 2014 just wrapped up in New York City this week. If you are unfamiliar, this event is pretty much like taking a time machine into the future and playing with cool toys the whole time. For the upcoming year, the toys presented at Toy Fair will be what children are begging for. So, it is no surprise that Nerf had a large presence at this year’s show.

Nerf’s most popular product at Toy Fair 2014 was the Nerf N-Strike Elite Cam ECS-12 Blaster. Set to go on sale in the fall of 2014 for a very reasonable $80, this blaster is the most high tech Nerf item yet. What sets it apart is you can record your target practice and play it back right on the crosshairs. This means you will have video evidence to show off your superior Nerf shooting skills.

The ECS-12 is still in its prototype phase, but it shoots and feels just like other Nerf guns before it. The blaster is able to send the darts as far as 90 feet away and can hold a clip of twelve foam darts. Right where the sight usually is, there is a low resolution color screen that is nearly two inches, and you can use the camera to record video and photos.

The ESC-12 is the first Nerf gun to have play back capabilities right on the gun. There are four buttons underneath the camera for

There is a spot for a four gigabyte memory card on the front shaft of the blaster, which should be enough for just about anyone. Four gigabytes is enough space for three hours of video or 2,000 photos of you terrorizing your friends and family, according to Hasbro. There are still some kinks that Hasbro is still working on, including improving the video playback.

Overall, the gun itself is fairly similar to the Nerf N-Strike Elite Rapidstrike CS-18, which retails for around $40. The CS-18 has a bigger clip of 18 foam darts, but it does not have a memory card or camera. Essentially, when this comes out, you will want it for the camera. Since it is integrated into the gun, it is less bulky or prone to mishaps than an add-on.

This will be an exciting product to watch out for in time for Christmas 2014. Nerf also introduced a remote control robot that fired foam darts at Toy Fair 2014, which we will cover more closely in a future blog post.