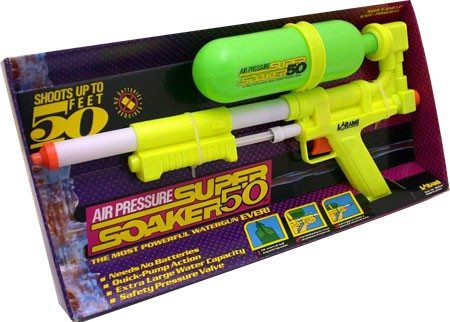 The brainchild of an engineer, Nerf Super Soakers are beloved by children and adults alike. A great way to have fun and cool off, Super Soakers carry an interesting history about how they came to be the toy we know and love today.

For many, the term Super Soaker is synonymous with water pistols of all types, as well as getting utterly soaked. In the early days however, water guns were fairly weak, and could only shoot a couple feet at best. But, in 1982, Dr. Lonnie Johnson stumbled upon the creation he’s been logged in the history books for. (We may still see more of Dr. Johnson’s brilliant inventions in the future however, as his companies are developing a new generation of rechargeable batteries as well as JTEC thermal-to-electrical conversion technology.)

At the time of the Super Soaker’s invention, Dr. Johnson was a nuclear engineer employed to develop spacecraft systems at a jet propulsion laboratory in California. He had been at home working on a heat pump innovation when a nozzle he had hooked up to the sink shot a stream of water across the room. This sparked the idea for a more powerful water gun, and Dr. Johnson created a prototype for his invention not too long after.

Made from Plexiglas, and using the combination of a piston, air pressure compartment, water chamber, and release valve, Dr. Johnson’s prototype water gun incorporated manually compressed air that shot water out when the air was released. Sound like your standard Nerf Super Soaker pump blaster yet?

Since air pressure power made this water gun shoot faster and further than any other squirt guns at the time, Dr. Johnson’s young daughter and her friends loved the device. It would take 8 years however, before Dr. Johnson could find a company that would develop and produce his new type of water pistol commercially.

During a failed contract with Daisy™ (a BB and pellet gun company) from 1985 to 1987, and then the bankruptcy of Entertech (who made battery operated water guns) in 1989, Dr. Johnson refined his invention so it had a separate soda bottle shaped water reservoir on the top of the gun. This change not only resulted in the iconic appearance of Super Soakers, but made Dr. Johnson’s invention more easily produced.

Eventually in 1989, another battery powered water gun maker called Larami Toys took interest in the water pressure blaster. Dr. Johnson’s invention was originally sold to customers in 1990 under the “Power Drencher” name, but did not do well due to poor marketing. The name of the toy was changed to “Super Soaker” and the Super Soaker 50 was re-launched with better marketing and a TV advertising campaign.

The rest is history. “The most powerful water gun ever” made a blast among consumers, with 2 million water guns being sold in 1991 alone. Hasbro’s Nerf line merged with Larami Toys in 2002, but in the nearly 25 years after the first Super Soaker was introduced, there have been more than 170 versions of Dr. Johnson’s invention.

Did anything in the history of Super Soakers surprise you? Tell us in the comments!