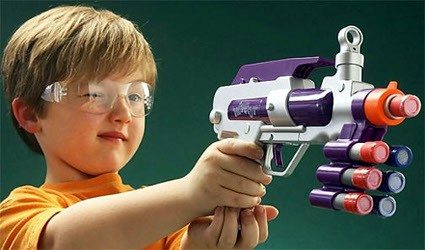 Recently, Nerf blasters have been making the news not for how fun and awesome they are, but for safety concerns. Parents have been wondering whether Nerf guns are safe for their kids, and when you type the phrase “Are Nerf” into the Google search bar, a top question that pops up is “Are Nerf guns dangerous?”

These safety concerns over Nerf guns started in late April, when mass media covered how 6 high school students in Wausau, Wisconsin received disorderly conduct citations for having a “Senior Shoot-Out” style Nerf War as part of their class tradition. Neighbors saw the students pointing Nerf guns at each other and called the police, leading to the students being arrested and cited. There was uproar as parents questioned how the situation was handled, and the citations were eventually dropped.

Following this coverage of the Wausau incident, several high school districts sent letters or emails home at the end of May warning parents about their seniors being engaged in Nerf War battles. These areas included the Eau Claire Area School District in Wisconsin and the Hudson School District in Minnesota.

It’s important to not misunderstand however. Nerf guns are not inherently dangerous, as like any toy, they can be played with safely or recklessly. These warnings intended to proactively inform parents about the danger of risky behavior during a Nerf War.

While it’s easy to view these school districts’ concerns as overly cautious, potentially dangerous behavior has occurred. In Minnesota, the worst was a head-on car collision from seniors playing while driving. Thankfully there were no injuries; however, the following advice and precautions are good to keep in mind when playing with Nerf guns.

Do you have any Nerf gun safety tips that we didn’t cover?
Share them with us in the comments below!