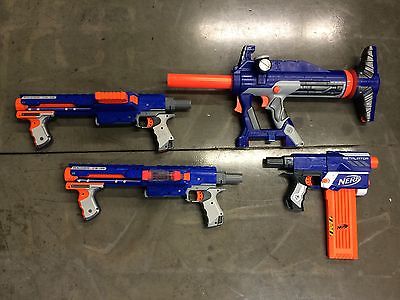 Nerf wars are a lot of fun, especially when you have lots of people and can divide them into teams. However, unless you’re just having one-on-one duels, Nerf teams have to be organized in order to be the most efficient. It usually doesn’t work too well if no one knows what they are supposed to be doing.

Similarly, just like other team orientated activities, some people are better at a certain job or naturally excel at one play style over another. A good Nerf team will take both group needs and individual strengths into consideration for a winning combination. If you’re not sure what kind of Nerf player you are yet, try out different styles with friends in casual games, or keep on reading and take note of what roles sound appealing to you.

While not everyone sets up their teams the same, usually all roles have a primary and secondary weapon (that ideally use the same type of darts). So, whether you’re hosting your own Nerf war or just want to play a more organized military version of Capture the Flag, here’s a lowdown on the most common Nerf team roles.

In the chaos of war, most teams benefit from having a leader to direct them. The commander should be experienced, able to lead from the front, and be able to read into situations and enemy behavior. They must make good decisions quickly and tactically guide their team.

Commanders usually carry multi-purpose blasters that work well in most situations, such as an Alpha Trooper or Recon, with a pistol like the Maverick as backup.

Generally fast runners, scouts are needed to go into the battlefield to gather information and bring it back to their team. Scouts should also be agile and have decent stamina for running.

While not getting caught is best, scouts generally arm themselves with light, stealthy, and close-range blasters like a Recon, Magstrike, or Deploy.

Defenders are the main defense of the team, and are vital in protecting your base or flag. They usually have a ton of firepower and mow down the enemy using automatic or semi-automatic, high-ammo blasters like a Stampede, Vulcan or Raider.

Assault troops are the front line soldiers who raid and take over bases. They need to be fearless yet tactful in terms of knowing when to push and when to defensively fall back in battle. Assault troops use close to mid-range blasters like a Barricade, Stampede, or Raider.

Your long range assassin, snipers usually stay hidden out of sight and accurately pick off enemy troops. A good sniper needs to be precise, efficient, and know how to set up a good hiding spot with a backup escape route.

The Longshot is one of the best weapons for snipers, though a Longstrike works too. Snipers usually pair their main gun with a close-to-mid range backup pistol like a Maverick just in case they have to engage in close combat.

What Nerf team role do you like to play? Let us know in the comments!