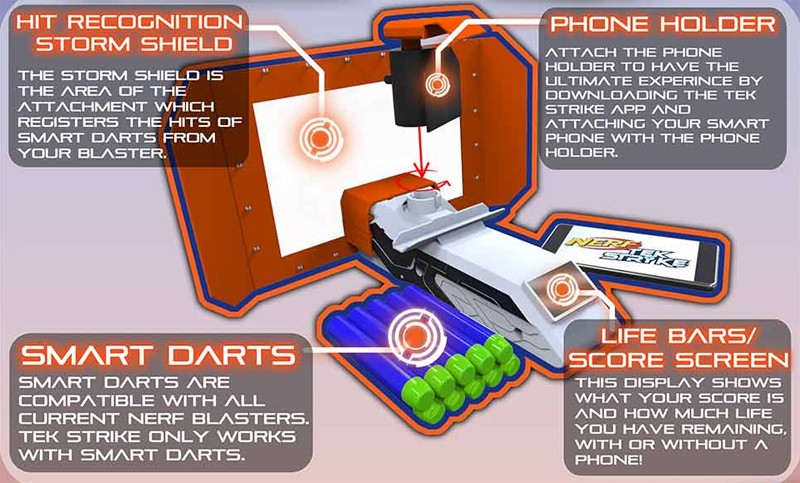 Coming to a tactical rail near you, is this innovative licensed accessory set to drop in 2014. EyeSpy Toys is the mastermind behind the Nerf TekStrike that was announced at the 2014 New York Toy Fair. At the Fair, there was not a good prototype available, so the information we have so far is based on information directly from EyeSpy Toys.

Overview of the Nerf TekStrike

For Nerf blasters, the Nerf TekStrike will be an innovative new attachment. A state of the art wireless playing field can be simulated just about anywhere, including your backyard, with the Nerf TekStrike, which utilizes patented hit recognition technology, Bluetooth connectivity, and programmable Smart Darts.

A programmable radio frequency identification (RFID) chips is contained within the Smart Darts that come with the Nerf TekStrike system. These Smart Darts can then be tracked through the use of RFID and Bluetooth technology. Damage is displayed on a built in LCD screen whenever a dart hits the Storm Shield. Who the shooter was and what type of ammo it was hit with are recorded. The shooter then gets hit points sent to his screen.

The TekStrike Storm Shield casts an invisible sensory grid over the entire playing field and attaches to the tactical rail of any Nerf blaster.

How to Play the Game

You can wirelessly program the Smart Darts by swiping them against the Storm Shield of the Nerf TekStrike after you select your ammo type. Then, to start playing, you just start to fire at your opponents’ shields. Successful shot alerts will instantly be sent to your screen. To get ready for your next battle, you can improve your accuracy by using the single player training mode.

Available with the free Nerf TekStrike app download, you will be able to track team stats, select mission objectives, and unlock new weapons by using a tablet or smart phone as a remote base when you are ready for advanced battle scenarios. For all sorts of features, such as blaster upgrades, accuracy stats, and GPS tracking, you can attach an actual smart phone to the Storm Shield of the Nerf TekStrike for the full video game experience.

When Can You Get It?

EyeSpy Toys has set the release date for August 2014. One of the most interesting aspects about this is the level of technology that they are using. RFID and Bluetooth are used to track the darts. Despite the use of cutting edge technology, the suggested retail price they announced is $24.99. This is for the Storm Shield tactical rail accessory as well as ten of the Smart Darts.

Stay tuned for a hands on review once they get the bugs worked out and have a prototype available.