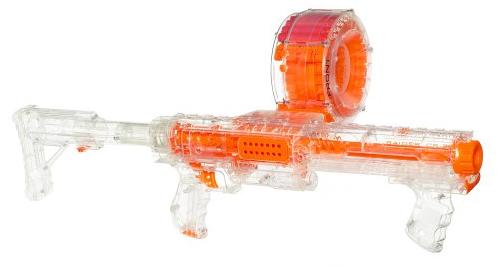 Nerf is releasing 5 clear versions of Nerf guns in their N-Strike line. The Raider CS-35 happens to be one of the lucky few.

Featuring everything the standard Raider has, the clear version of it is just a little more to look at.

That’s not to say that the original doesn’t look awesome, because when pictures of it started being released, we dug the blue digital camo on it, but there’s just something about seeing it completely transparent that excites one.[easyazon_block add_to_cart=”default” align=”right” asin=”B003IH0MNW” cloaking=”default” layout=”left” localization=”default” locale=”US” nofollow=”default” new_window=”default” tag=”126p86-20″]

The clear clip reveals all the darts, and the clear shell lets you to see the internals – it’s all pretty sweet, and I know plenty of people will spend a good chunk of time watching as darts feed into the gun… it’d be hard not too!

This special edition version of the Raider will be sold for a limited time, so come summer 2010 as these limited editions appear, you better act quick, because I can see them selling out fast.