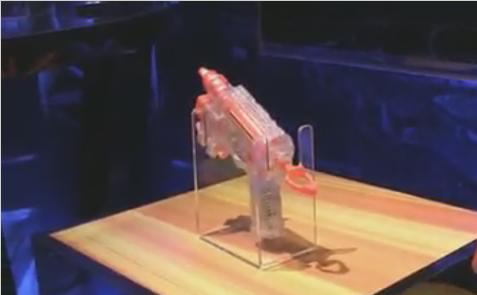 This tactical Nerf pistol is one of Nerf’s oldest standing blasters. It has gone through multiple versions over the years as it has been upgraded in design to meet Nerfers expectations. In fact, it has seen probably the most amount of color schemes out of any other blaster! The Nite Finder EX-3 has seen colors such as yellow, blue, teal, silver, and now clear! (if clear were a color!)

Perhaps it sells well because it’s equipped with a fully adjustable laser sight that can be sighted in on targets, or perhaps its because it’s just plain cheap! Either way, it makes sense why Hasbro decide to use this Nerf gun in their “Clear the Way” promotion, as it has stood the tests of time.

It has made it through 3 product lines: Hyper Sight, Dart Tag, N-Strike, and now it will be available as a special edition Nerf gun come summer 2010.

Will you be getting one?