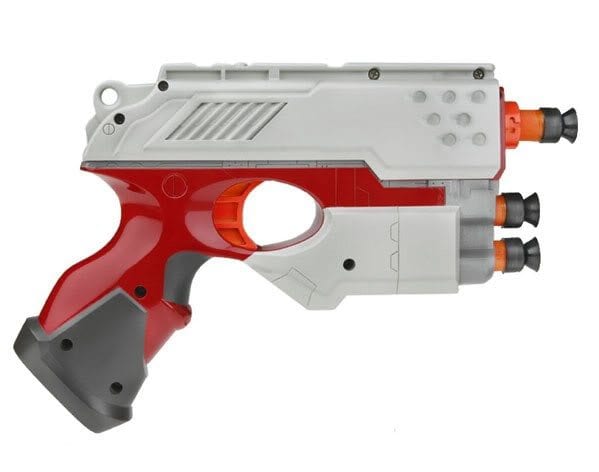 The Nerf N-Strike series is known for its high-quality toy blasters, and the Scout IX-3 is certainly worthy of that label. This one-shot model might have a seemingly limiting capacity for ammo, but it does have quite a bit of other features that make it worth the while.

The N-Strike Scout IX-3 has been hailed by some as the ultimate or best pistol-style blaster on the market. The reasons for these claims vary from one reviewer to the next, but in general there are two big reasons people seem to love this blaster. The first is its precision, an element that the entire N-Strike line of products is known to boast. The other is the range that it’s able to reach. While it may only have a single shot, the average shot reaches roughly ten yards, with some shots exceeding that to 35-40 feet, according to very satisfied customers.

The Nerf N-Strike Scout IX-3 is typically sold in packs of two. Each pack also usually includes 6-12 darts. This may seem like an excessive amount of ammo to include with a blaster model that is only able to load and fire one dart per round, but each of the blasters also contains holding slots for two additional darts. This allows those involved in battles and games to reload quickly.

For those buying these blasters for aesthetic purposes, there are a number of ways that you can incorporate them into costuming. Many science fiction series feature characters who typically carry two pistols. One such character that’s gaining popularity is River Song – a reoccurring supportive character in the hit BBC series ‘Doctor Who.’ With the right paint job (one that, for River’s costume, includes white and light grey tones), these pistol-style blasters could easily complete a number of cos-play looks.

While these blasters fall relatively low on the shelf after all elements are considered, they are a great example of big things coming in small packages!