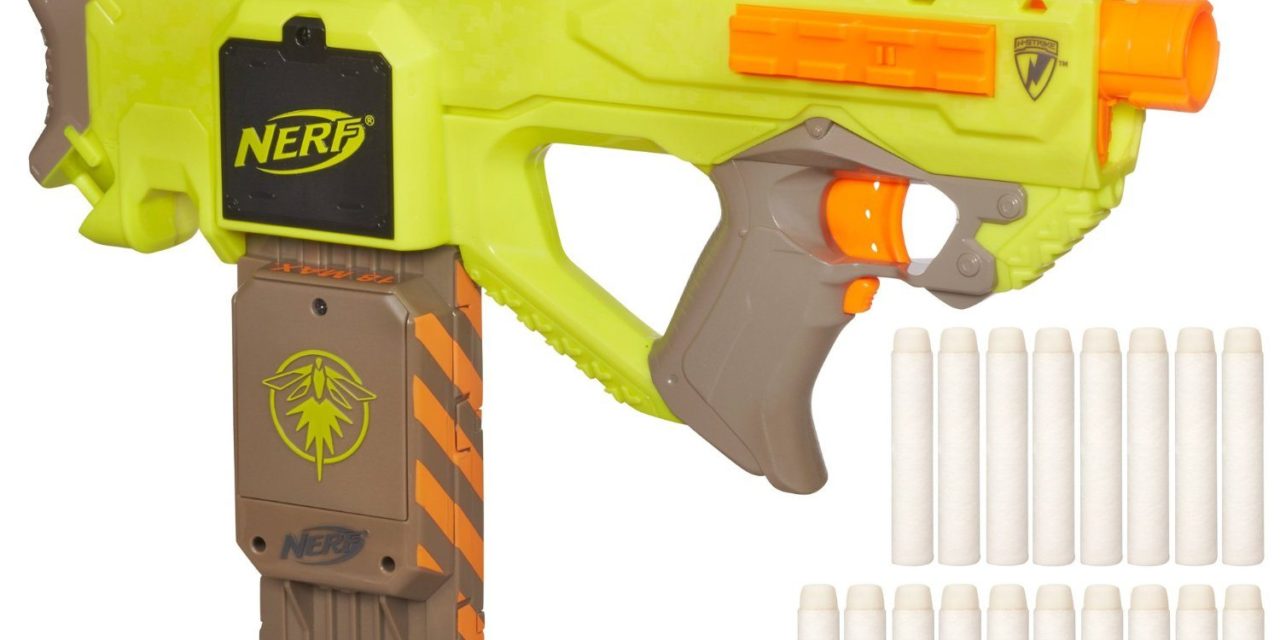 The Nerf Rayven CS-18 is a brand new piece in the N-Strike lineup that promises to offer fast paced, high tech shootouts. A blaster based around a flywheel system, the futuristic look and feel of this gun promises great things and the gun actually delivers on that promise.

With two tactical rails, barrel extension compatibility and a rapid firing rate, the Rayven is versatile, capable of short and long range combat but perhaps most capable at mid-range. With accuracy up to forty feed, but closer to twenty five or thirty on most days, the Rayven is best for fast and frantic action when you need to fire off a dozen accurate darts in quick succession.[easyazon_block add_to_cart=”default” align=”right” asin=”B0060Y240O” cloaking=”default” layout=”left” localization=”default” locale=”US” nofollow=”default” new_window=”default” tag=”126p86-20″]

With an AA powered flywheel, the gun is great for fast paced, dual wielding action, firing out its 18 shots in quick succession, or 36 darts for dual wielders. There’s an iron sight available if you line the dot at the tip up with your tactical rail, and while the gun is capable at slow-and-steady sharpshooting jobs, it really is best suited for more engaged action.

If you are going to do some sniping, use the Spectre or Longstrike barrel extension, as other extensions might result in the dart ricocheting around inside the barrel, resulting in a shorter range shot rather than a longer range shot.

The Rayven takes Streamline darts and comes with glow in the dark darts which make it a lot of fun for night time warfare. It feels like you’re in a video game when you fire out a half a dozen glowing green darts in rapid succession.

Surprisingly quiet and small for such a potent weapon and not prone jamming, the Rayven is probably best used as a standard primary weapon with a Longstrike as your sidearm and a non-battery operated blaster as your backup. Perfect for stealth and run-and-gun attacks.

The darts will fly as fast as you can pull the trigger, which, with the 18 dart clips, makes the Rayven probably the closest thing you’ll see in the N-Strike lineup to a standard issue Colt 1911 or a Beretta. As long as you keep the batteries fresh, you’ll never be left outgunned in any firefight. If you’re ever going to outfit a whole team with matching weapons, the Rayven is the perfect starting point for any arsenal and probably the very best gun to pickup if you’re a beginner just looking for a single piece to start your collection.

With the same hinge open jam door as the Recon and sling holes at the top and bottom of the stock, the Rayven functions perfectly as a primary weapon. It’s fast, versatile and reliable, almost never jamming if you treat it well. At about 13.5 inches long, it’s portable and it feels really cool in your hand with the clip behind the grip. If there’s only one problem with the gun, it’s not as capable at super long range as some weapons, but then, it’s not supposed to be. This is perhaps the pinnacle of Nerf dart blasters right now.