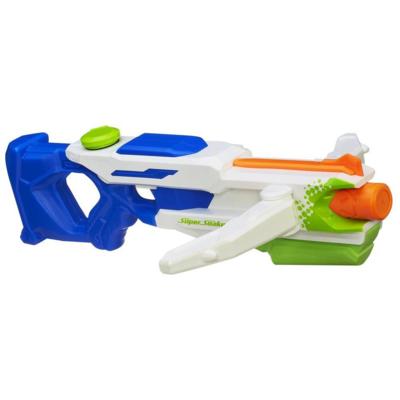 Did you know that 2014 is the 25th year of Nerf Super Soakers? There’s never been a better time to soak others and get soaked! A classic for all-summer fun, Nerf Super Soakers are a great way for kids, teens, and even adults to cool off and have a blast during those hot sticky months. Just in time for this year’s epic summer water battles, Nerf has released a super star lineup of 5 new Super Soaker blasters.

Easy to fire and refill, this pump action blaster is tons of fun. Capable of holding up to 84 ounces of water, you can soak your enemies like a champ. This big drencher features a triple mode nozzle, so you can unleash your attacks exactly how you want. Scatter mode lets you hit multiple targets at once, while Flood mode will give you a huge stream of water! Want to soak faraway targets hiding more than 38 feet away? With Distance mode, they can’t escape your Barrage.

This double-barreled pump action blaster was made for drenching. Each pump fires 6 streams of water whenever you pull the trigger! Just fill up the 27 ounce tank and fire away. Designed to be a sidearm, the Double Drench is lighter to carry and easy to fill, but still packs a punch with up to a 30 foot range. Fast and with a strong stream, this Super Soaker will give you the double-barred “Shotgun” effect you’ve been waiting for.

Compact and trigger operated, the Alphafire allows for non-stop fun and total soakage. A stealth blaster “squirt gun”, this Super Soaker does not need to be pumped, allowing you to quietly sneak up on your unsuspecting target. Made to hold up to 7 ounces of water, the Alphafire is quick to fill, launches a triple-stream blast, and can shoot water up to 20 feet when fired!

Designed for non-stop soakage, the Hydrostorm is a motorized, trigger operated blaster. With a 25 ounce tank, this Super Soaker can blast targets up to 30 feet away and will keep launching water as long as you keep pulling the trigger. Your opponents better be ready for a non-stop water assault!

Featuring 2 different modes, this Super Soaker is great for blasting close and far away. With the crossbow arms in, this blaster can hit targets up to 38 feet away with a single stream. Then, when they get close, deploy the crossbow arms to release 3 streams of water and maximum soakage! A large-capacity blaster, the Tri-Strike Crossbow holds a massive 40 fluid ounces of water and ensures you’ll be the last one standing.

While these awesome new soakers haven’t hit retail shelves just yet, you can order them online and pick them up in store or have them shipped to your doorstep. Which one of the new 2014 Nerf Super Soaker lineup are you most excited for? Let us know in the comments!