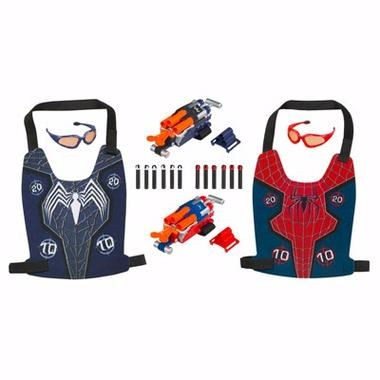 [singlepic id=108 w=450 float=right]The age-old struggle of good vs. evil that was once embodied in cops and robbers or cowboys and Indians is still alive today. Only the specifics have changed. Super-hero movies and modern trends have been taken up by NERF to give the old games new life with Spider-man Vs. Venom Dart Tag.

This NERF dart tag set is based on the Spider-Man 3 movie that pits the good Spider-Man against his nemesis, the evil Venom. The set is composed of 2 Dart Tag Blasters, 12 darts, 2 eye guards, and 2 scoring vests.

One of the scoring vests is in the traditional Spider-Man colors of red and blue, while the other is the black and white of Venom. Each vest is made in a front-only design with an open back. They have four scoring areas each, two 10-point targets and two 20-point targets and are made of a fuzzy material so that the darts stick using the same principle as Velcro.

The Dart Tag Blasters can fire darts up to 35 feet (10.67 meters). They have a rapid-fire action for repeat shooting. The eye guards are slightly tinted sunglasses that protect the user from stray darts to the eye.

The only drawbacks are that sometimes the darts don’t stick to the vests, but this can easily prevented by shooting at the vest from shorter distances. After all, in any nerf war where each shot counts, its better to be safe than sorry.

The coolest feature about the Nerf guns in this set is they strap to the wrist. This feature opens up the doors for carrying multiple Nerf guns at a time – just imagine a Longshot CS-6 in one hand and two of these strapped to the other… just check out the video to the left.

You can find this dart tag set for sale at your local Wal-Mart and ToysRus, as well as select places online for around $29.99.