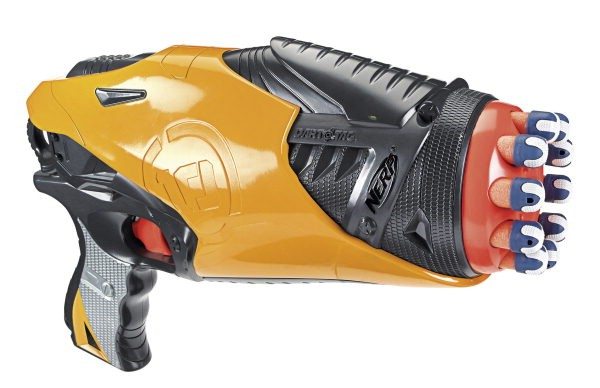 The Nerf Dart Tag Speedswarm is something of a “Panic Button!” weapon for your arsenal. This is the gun that you whip out and “spray and pray” when you’re cornered.

Roughly the same size as a Maverick, this auto blaster holds ten darts and is perfect for those spastic, frenzied situations where you get ambushed or caught off guard and you need to defend yourself in a hurry.[easyazon_block add_to_cart=”default” align=”right” asin=”B006BLH8NE” cloaking=”default” layout=”left” localization=”default” locale=”US” nofollow=”default” new_window=”default” tag=”126p86-20″]

The gun is an auto blaster holding ten darts. Oddly, the blaster is lacking an off switch so you might want to remove the batteries when not in use to ensure longer life.

The odd, bulky shape is designed for unloading those darts as fast as possible so it’s a little unwieldy. It can be used as a basic blasting pistol, but it really shines as a last line of defense, a panicked response to being put in a tight corner. That said, it’s also surprisingly accurate with an excellent forty five foot range, belying its odd, round shape. The only real difficulty is that the rounded shape makes aiming tricky until you get a feel for it.

If you’ve ever played with a Swarmfire, you know what to expect from this gun. Just picture that piece in the form of a blaster and you have an idea. Together the two make a perfect primary and backup combo. On the other hand, some players like to use the Speedswarm as a primary so that they can play with a quicker, more reckless approach.

Surprisingly accurate if trickier to aim, the gun is durable, reliable and, in fact, a whole lot of fun to play with. If you like playing “The Crazy One” on your team, this is the gun for you. Otherwise, it makes a great last resort, fire-and-get-the-heck-out-of-there weapon thanks to its reliability. Due to its unique design, it literally cannot jam up.

Bear in mind the gun’s warm-up time. You need to let the gun get ready before it’s ready to fire, so leave it on for a bit before a game just to be sure.

With the lightweight, fast action the gun provides and the from-the-hip shooting style encouraged by its shape, it’s really perfect for dual wielding, firing 10 darts in 7 seconds solo or 20 in 7 seconds as a pair. With two guns, it’s like having a full-auto that can aim in two directions at once.

The yellow gun with its blue trigger is visually unique among the Nerf line, reflecting its unique attributes as a weapon. The strange shape may be cumbersome at first, but once you get used to it you’ll find that the gun is perfect as a backup, good as a blasting primary and awesome when dual-wielded.