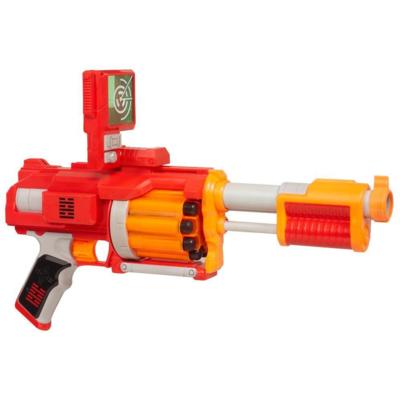 Hasbro made the G.I. Joe Retaliation Ninja Commando Blaster available for civilian Nerf experimentation in the summer of 2012. (In November, it retailed for $24.99 USD.)

This promotional weaponry was meant to tie into not only the popular action figure set but also a 2012 movie starring Bruce Willis and Dwayne “The Rock” Johnson called G.I. Joe: Retaliation.

Though the movie was held back until 2013, the Nerf Commando Blaster stayed available for civilian use. Revies have been positive. Once new recruits get their hands on this blaster, they hold true Nerf power in their hands.

The G.I. Joe Retaliation Ninja Commando Blaster reloads easily, too. Just push fresh darts through the rear of the revolver ports and fire another volley of punishing shots.

For optimum accuracy, an easy-to-use, removable scope helps to bring targets more easily into focus. This scope is what makes the Commando Blaster unique among its peers in the Nerf arsenal of weaponry. Its predecessor, the Dart Tag Furyfire was a single-fire blaster from 2009 that didn’t have a dedicated scope but came in pairs with two sets of special goggles, an electronic flag, 20 darts and Dart Tag vests.

Now might be the time to land a G.I. Joe Retaliation Ninja Commando Blaster before the movie makes them harder to find and potentially more expensive next year. For fans of the franchise, the blaster could be a present from Santa to tease the movie in the coming months.

This dart gun, with a range of nearly 50 feet, is good training in preparation for using Nerf’s blaster with the most firing capacity ever — the N-Strike Elite Hail-Fire, with 144 darts in four, rotating magazines that can fire in semi-auto mode as far away as 75 feet. This semi-automatic Nerf rifle is recommended for children of all ages over 8; whereas, the G.I. Joe Retaliation Ninja Commando Blaster is for kids 6 and up. Perhaps the birthday boy can hold the N-Strike while all the guests get the Commando Blasters. That would be fair.

Both are solid Nerf weapons that typically won’t just break by dropping them. You have to really want to break this gun to do it. And who would want to do that to such a splendid addition to the Nerf gun arsenal vault.