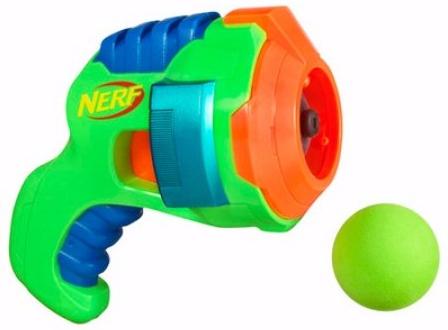 Tired of too much automatic NERFing? The NERF Atom Blaster let’s you power up your load-and-shoot skills for a very tidy price.

The NERF Atom Blaster isn’t just another spin on NERF weaponry. It was designed as part of a Master’s degree project with some sound science backing it up!

Features of the Atom Blaster

Looking like a small turbo engine with a trigger and handle, this ball blaster’s hard molded plastic design can withstand throw-down punishment if you need to change weaponry in mid-battle. Four NERF balls are included in the set.

Since the NERF Atom Blaster only shoots one ball at a pop, loading-and-shooting adds an extra element of challenge to your game.

Loading and aiming one NERF ball at a time isn’t for amateurs!

You can hand load by pushing the balls into the muzzle of the gun, or have your ammo supply on a solid surface and push the gun down directly onto the balls. Your gun, your style, you choose.

Priced right at well under $10, the NERF Atom Blaster is a must-have in your arsenal.

And if you aren’t convinced that the Atom Blaster was homework, check out the designer’s site.