Complete with an E-Dot site, rear stock, 5 round magazine clip, and a maximum shooting range of 80 feet, this homemade nerf gun was made to perform. 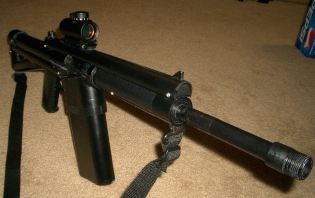 Cut and crafted by Boltsniper (his alias) out of pvc piping, springs, and other spare parts, you could say it isn’t the easiest nerf gun you could make in your spare time (it is the coolest though).

How does someone go about making a nerf gun like this? First it takes vision, inspiration, and an overdose of motivation. Here’s what Boltsniper has to say about how this project came to be:

The inspiration for this rifle stemmed from a few sources. Back in 2003 I built a magazine that I intended on using in a rifle that never got out of the prototyping phase. I wanted to use it in something and that was a big driver of this project. I also wanted to build a spring powered Nerf rifle that would produce ranges of slight under 100 feet. I’ve already done that high power sniper rifle. This time around I wanted to make the high ROF assault rifle.

For more on this homemade nerf gun, along with directions on how to make it, check out http://nerfhaven.com/homemade/boltsniper_far/.