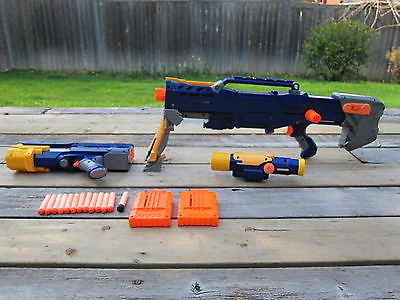 For many Nerfers, the appeal of Nerf guns is not just how fun they are, but also their range of customization. With a little tweaking, some paint, and lots of time and patience, skilled modders have turned their neon toy blasters into all sorts of cool looking pieces. Nerf guns have been modified into steampunk style props to full on replicas of blasters from games like Mass Effect and Halo.

Add-ons and extensions are great for enhancing your loadout’s appearance and performance, so here’s a basic guide to Nerf gun accessories. While accessories are usually sold separately, they are compatible with most if not all types of Nerf guns in the same series. For example, in Nerf’s main N-Strike series, all the blasters in that series have tactical rails, allowing you to easily switch most of your accessories around as you like.

A barrel extension does what it sounds like. By extending the barrel, this accessory makes your blaster more accurate when you shoot it. However, since it makes your barrel longer, the increased friction can cause your range to decrease. In look and feel, a barrel extension can also help create that awesome long shotgun look.

Also called a grip handle, this accessory helps to steady one’s aim. Similar to, but more sturdy than a pop-out bipod, an assault grip can be used with any Nerf blaster with a tactical rail. Depending on whether it is attached on the top, bottom, or sides of a Nerf gun, an assault grip can also act as horizontal foregrip or basic priming handle.

Unlike a real scope, most tactical scope accessories for a Nerf gun do not magnify your vision when you look through it. However, they can be helpful for aiming more accurately, as you can line up the marks on the front lens at a target. Modders have been known to attach scopes to blasters that might not need them, just for a more decked out look.

Compatible with many Nerf blasters and super soakers, there are various types of shoulder stock accessories available. They are designed to help stabilize the shooter when firing, especially when using an assault gun or slam fire technique. A shoulder stock can also help elongate the look of your Nerf gun for a shotgun or rifle style appearance.

There are many different Nerf sights. The most common are flip up sights and laser (or pin point) sights. Flip up sights are used to judge distance or compensate for gravity like standard iron sights. They can be used when deployed up or in a lowered position.

Laser sights are heavier, since they use batteries, and employ a red dot and crosshairs system to aim. Unlike real laser sights, the Nerf accessory has an angled lens so the laser doesn’t reveal where you are aiming at. Red dot laser sights are considered by some to be the most valuable of the tactical rail accessories.

What’s your favorite Nerf accessory? Let us know in the comments!